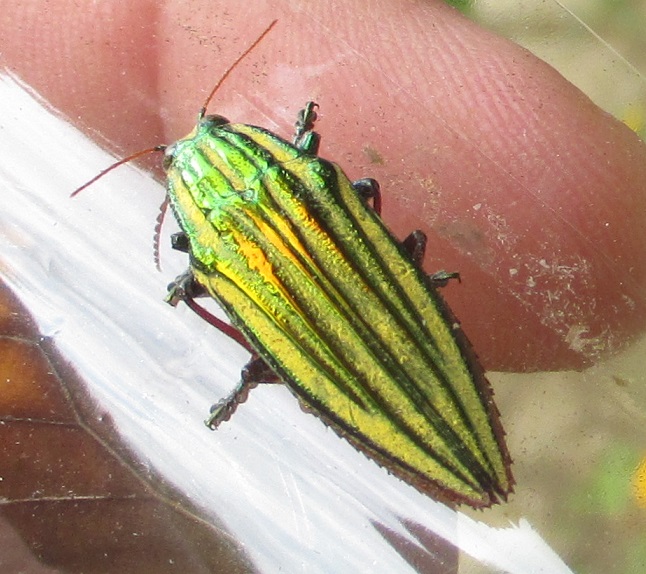 This was the real beauty from this week – a gorgeous metallic looking insect.  I think this bug is even on one of the Fiji postage stamps. 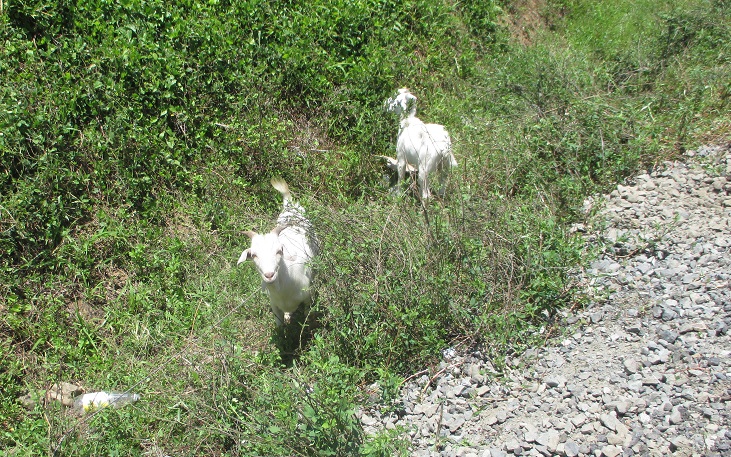 I saw Billy the goat and his sister foraging in the drain beside the road, thought “how sweet” and stopped to take a photo. 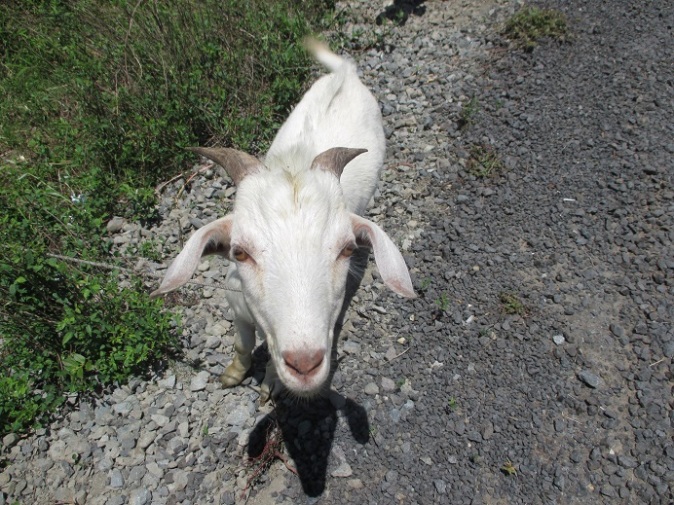 Billy recognized me and came up to say Hi!   I was so happy and surprised.   Billy’s owner told me that it’s good he stayed with us for a month, because he is not afraid of dogs any more.  If a dog comes near, Billy turns around and shows them his horns 🙂 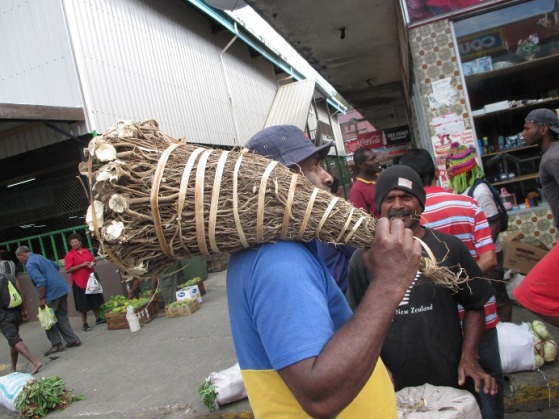 The proper way to drink yaqona (kava) the local mild intoxicant, is to pound the root, add water and squeeze.  The lazy way is to use powdered kava.  Anyway,  the dried roots are organized into a bundle called a waka.  I asked this man if I could take his picture because it is one of the biggest waka I ever saw.   Almost for sure he bought this to take to some ceremony (wedding, funeral, petition to a chief). 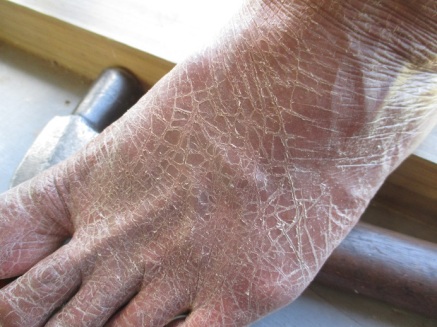 And THIS is an example of kanikani, the “lizard skin” condition that happens to people who drink too much kava.   It results from Vitamin A depletion.    This is my friend’s foot. 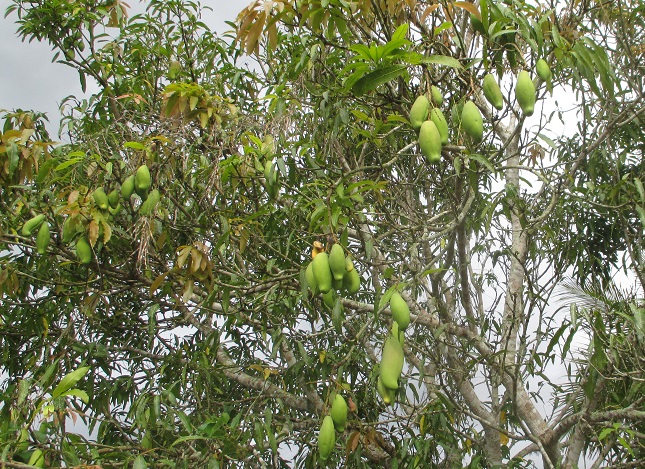 That long drought had one surprising side effect:  MANGOES ! 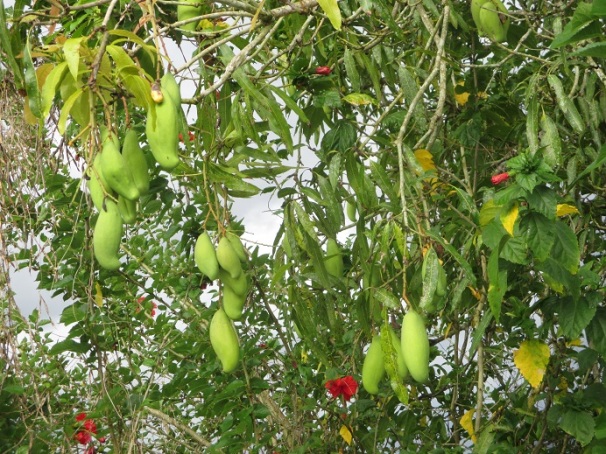 The tree is loaded.   We are shocked. 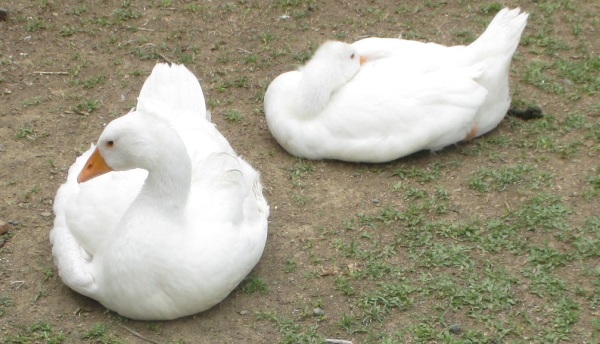 Two ganders that always hang out in our yard have taken to chilling in the driveway.  I know they are ganders because they are pure white.  The female pilgrim geese have some gray on them.

My dear friend planted the tree in memory of her grandpa  (see 21 August ) …. and then I forgot about the tree!   We had that awful drought, and the tree on the top of the hill …. well, I was afraid it was dead.  Austin said it might survive and that I should just watch it. 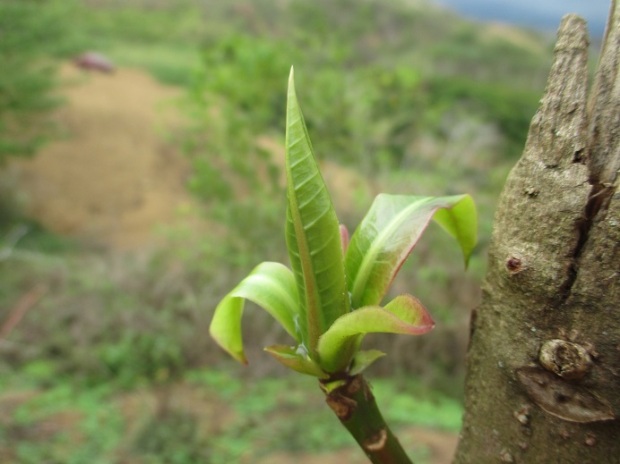 Finally!  It is putting out new leaves.   Isn’t this a delightful fleur-de-lis configuration! 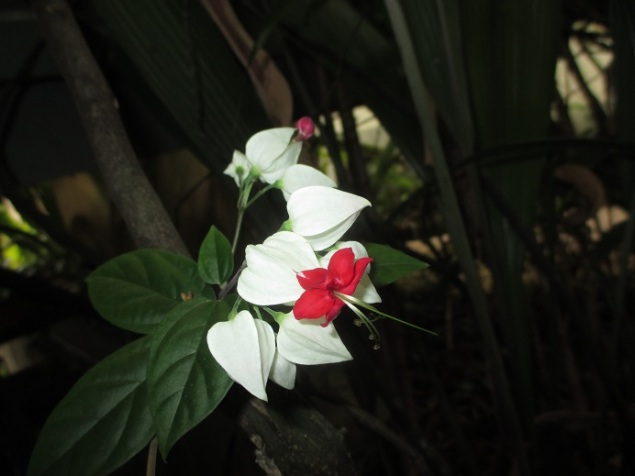 This is a flower I love that we have in Suva, a kind of ‘bleeding-heart.’ 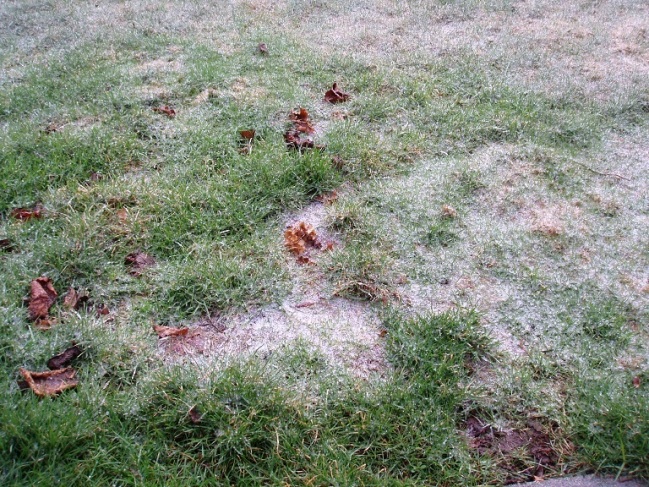 No, I’m not in Fiji any more.   The weather here hovers a little above and a little below zero Celsius.  I’ve started adjusting, but crikey!, it is HARD to get out of bed in the mornings.
.
Inside the house it is a case of Beauty and the Beast.
.

.
“Beauty” – actually 3 beauties are long-hair Ragdoll cats.  Two that belong to my co-suegra (fellow mother-in-law) and one that belongs to my daughter.   This one is Calista – the calico Ragdoll.
. 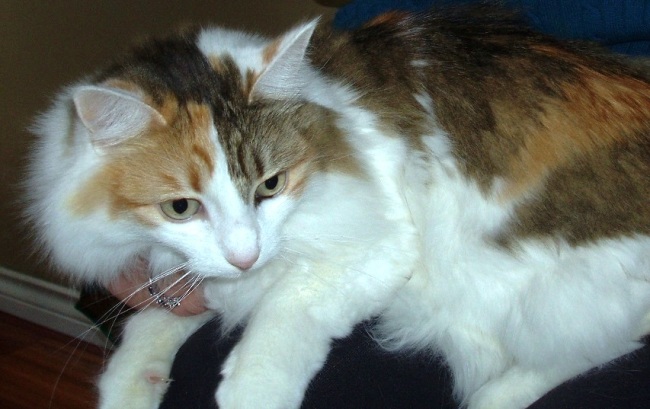 .
My photos don’t do her justice.   There is Ria, a tortoise-shell Ragdoll that I didn’t photograph, and a beautiful flame point Siamese Ragdoll named Leo, but the photos were exceptionally horrible, so here is a stock photo.
. 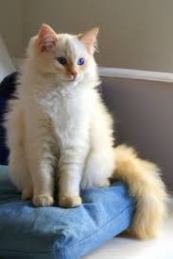 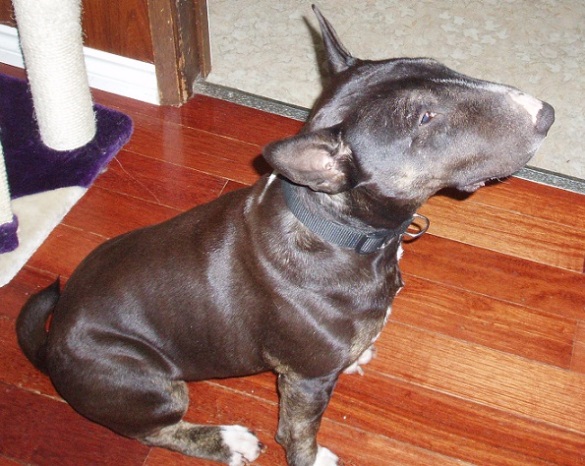 .
Again, the photos don’t do justice.  This is a real beauty shot for Boris.   Good Lord – what a dog!    He was actually bred for this!!    Boris is a Bull Terrier, with a really rounded forehead, set back ears, tiny triangle eyes and a porcine body.  They do not hunt or bark when strangers arrive or do anything else of normal doggy use.  Bull Terriers are marketed as the “gentleman’s companion” and some famous hockey commentator has one.    I vote for letting that commentator have two of them.  (I believe all the women of the house vote the same, but I don’t want to cause any family trouble.)
. 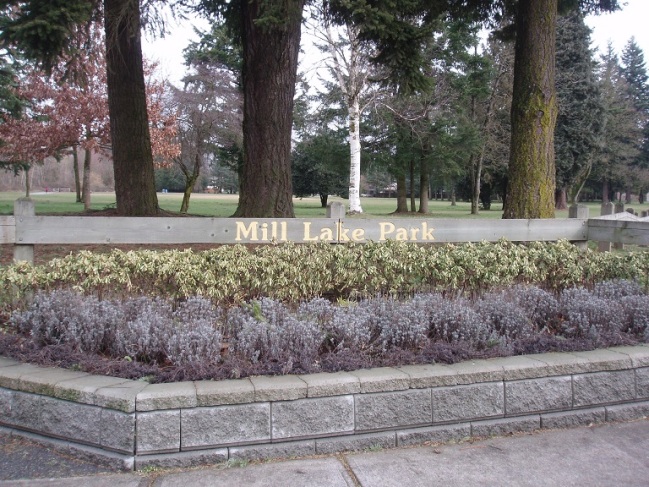 .
A real benefit of doing this blog is that my family all make an effort to get me out to see some interesting stuff.  My daughter took me to Mill Lake Park.  There is a wonderful mile-long nature hike around the lake!
. 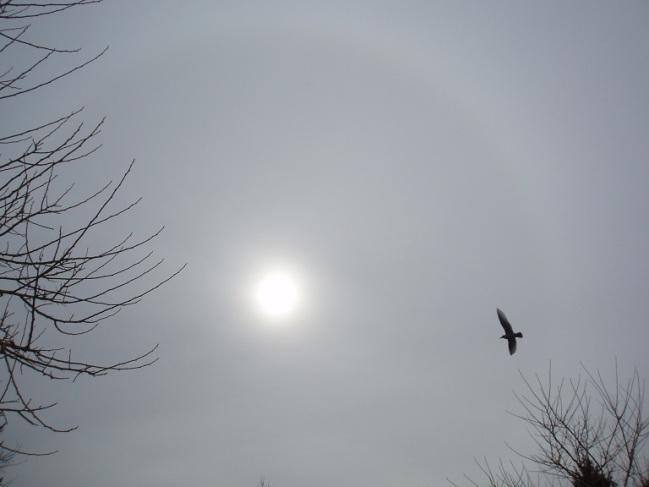 .
There were so many large birds in flight – swooping down nearby.  This was the only shot that came out at all.  The big birds were magnificent.
. 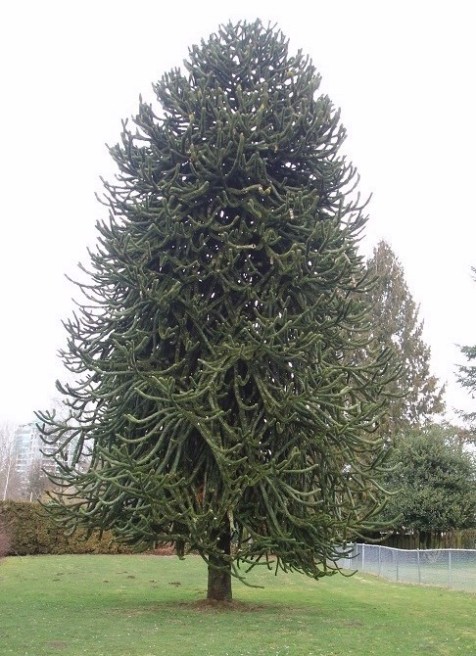 .
There was this TREE the like of which I’d never seen before!
. 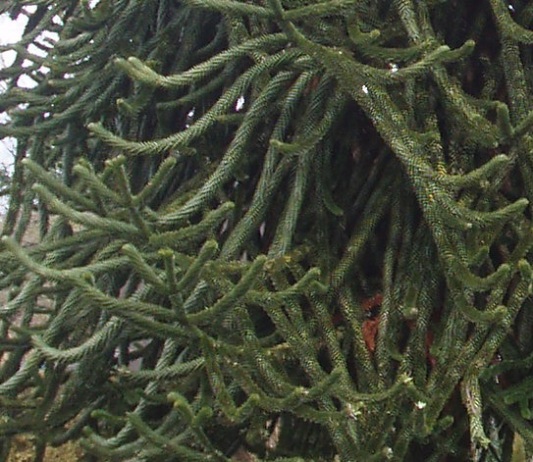 .
Like evergreen snakes growing off it!    I’m told it is a “monkey tree” or “monkey puzzle tree” (Araucaria genus according to the resident arborist).   A local elder tells me that when she and her sibling rode together in a car, the first to see a monkey tree could yell “Monkey Tree” and punch the other one in the arm – but she did not teach this game to her children.
.

.
Here are the rules, from the right of the scene.   Clear enough.  As an aside, I can’t help wondering about those 15 pounds of feces per week – is that per bird?  Good grief, I’d think we’d all be buried – there are hundreds of birds here.    And “pounds” – hello!  This is Canada – they are SO metric until they want to make a point.  “15 pounds” does sound so much more substantial than “6.8 kilograms.”  Anyway – enough distraction … here is the left flank of that same shot.
, 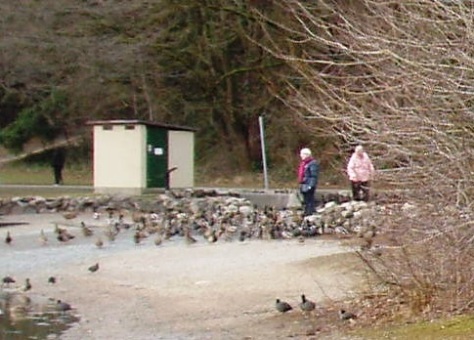 .
A benefactor surrounded by grateful birds getting a little handout.   The softie.  I saw this happening a few times.  One gent looked quite sheepish.
. 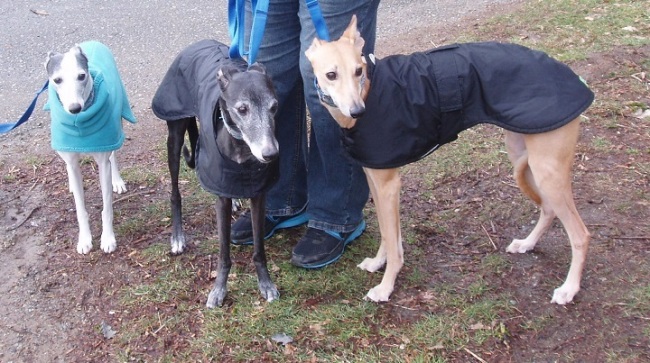 .
A few meters further along the trail, I met three very handsome dogs!   Like house pet-sized Great Danes.  A chat with their friendly owner turned up the information that they are Whippets  Whippets don’t shed and they don’t have doggy smell.   They look very intelligent.   They are natural athletes.  Too bad that hockey commentator didn’t have a Whippet companion……
. 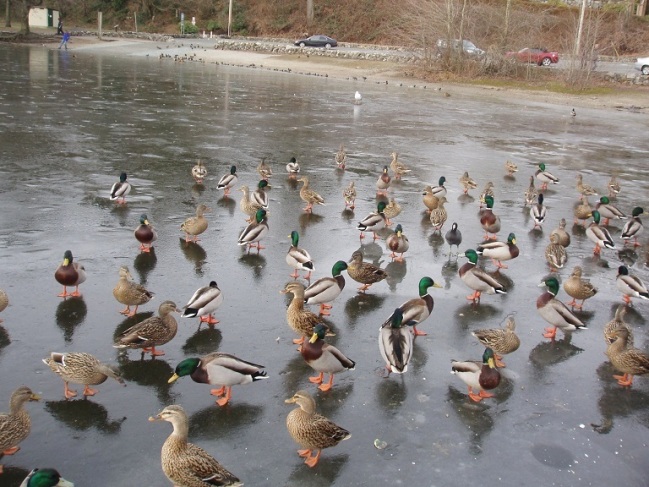 .
Finally – here is the nature bit in Canada that most reminds me of home in Fiji –  DUCKS and a POND.  Isa! Isa!    The ducks are walking on ice.
. 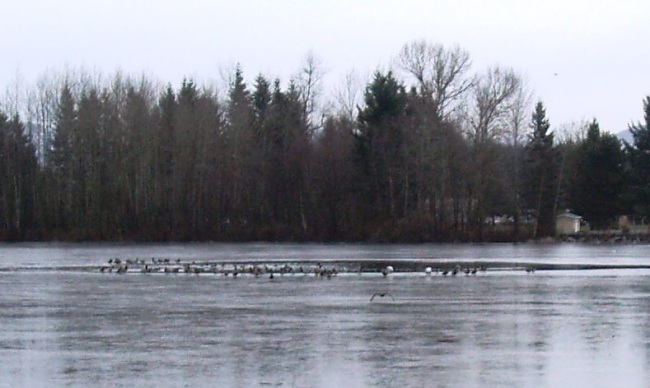 .
There was one not-yet-frozen spot out in the middle of the pond and lots of ducks went out there to swim.     Cold bath, anybody?
. 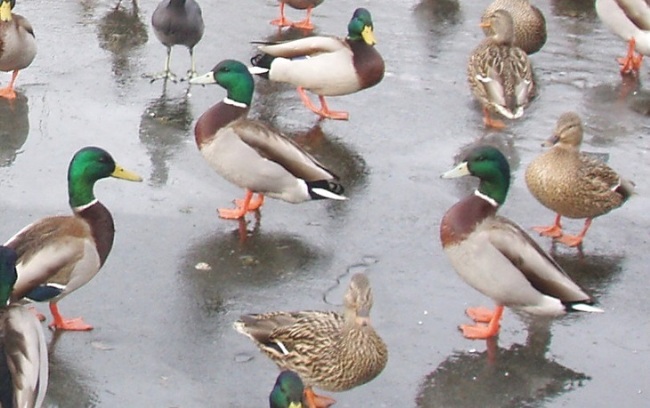 .
Austin – I know you’ll like this.  These are really pretty ducks (mallards?) – some have yellow bills and some have white.   All have bright orange feet.    Our granddaughter announced to me that the green-headed ducks are boys and the brown ducks are girls.  I told her I thought she was right.   Was she?
.
Follow Flora and Fauna Weekly Report on WordPress.com