The theme of this week is Crazy. 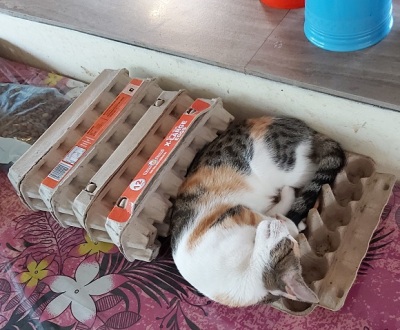 I know egg crate mattresses are popular, but the human ones are squishy.  (Akka took this photo and he labeled it “When Any Box Will Do”) 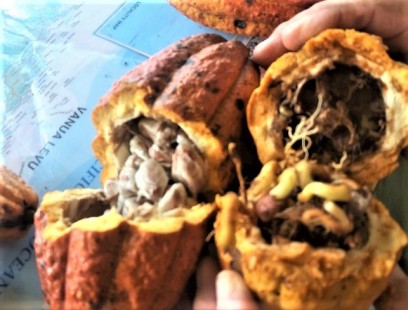 Cocoa seeds putting out roots while still in the pod.  What doesn’t show in the photo is that the top of this pod is still green.   (What we learned is that the red pod cocoa gives a much better crop than the yellow pod cocoa.)

And finally –  needs no description 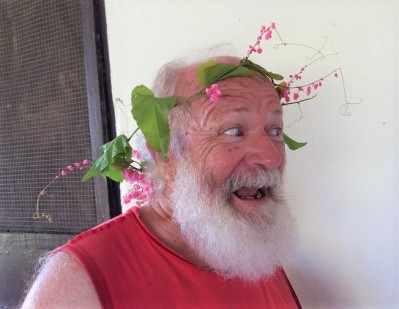 Our fairy in his garland.

Yesterday, some neighborhood kids came by hoping to swim.  Alas, the meetings-ban makes us feel unable to say yes.  But they left with cake, a kitten and smiles.  Good enough.

They’re beside some oja santa leaves, the stems of which went into yesterday’s lunch.

Then this morning Mama Daisy killed a myna for their morning tea. 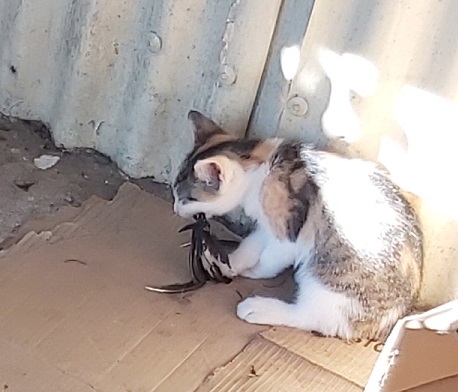 Buttercup was chowing down.   Buttercup and Shadow are probably going to be permanent family members.

Austin gave two of the puppies to some cousins in Lawai Village.  They had a very big healthy dog at home, so Austin is happy that the pups have a family who knows how to take care of them.

We’ll probably keep the other two to replace Tarsi and Torsett.

A few days ago somebody was cleaning and came to the kitchen with the nest of a paper wasp.

Granddaddy and Kiki knocked and dug all the larvae out. 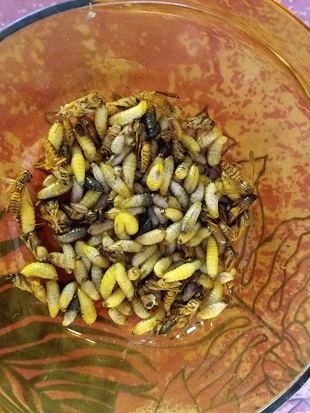 The next morning, Kiki greeted me with a bowl of fried wasp larvae – strongly encouraging me to eat one with a stinger.  He has already eaten seven of them. 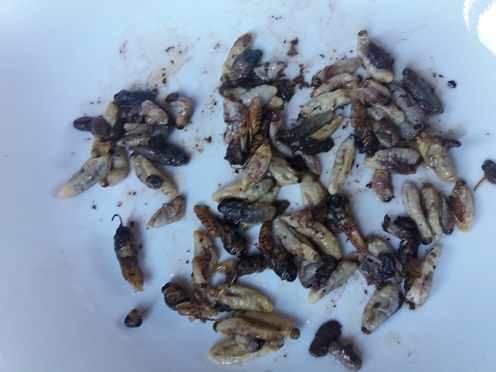 I did try them.  They did not live up to Austin’s “they taste like prawns!” recommendation, but they weren’t bad.  I’ve eaten worse.

Years back I bought a hatchet for my son Guy – already a teenager at the time.  It was nothing special to him.  But this week Kiki found it.  What a TREASURE! 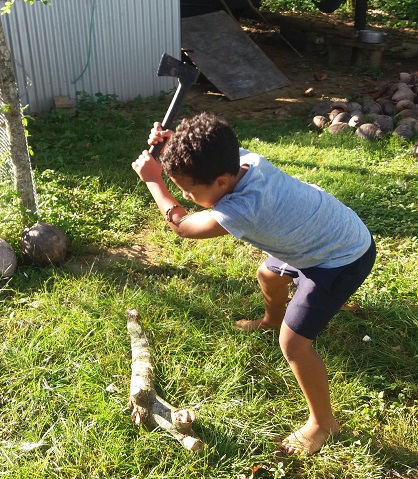 I’ve got videos of Kiki going at pieces of wood.  Age seven is the perfect age for a hatchet – not 14.  Ha ha.

Thanks to the unending hours at home, Austin cleaned off his dresser and his stuff is more visible.  So what a surprise this morning when I could read the date: 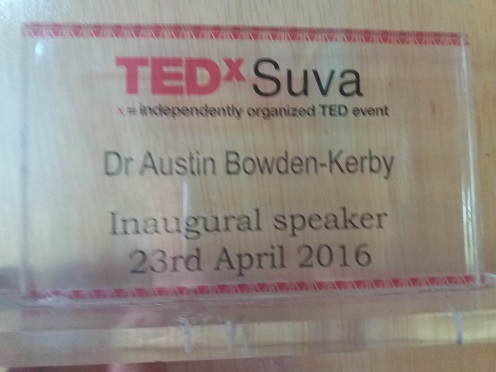 Today is exactly the fourth anniversary of his TEDx talk in Suva.   So many years ago.

A last (weird) note.  Our house was haunted when we bought it.  The ghost did things like turn on the radio.  Austin and Michael found out what ceremony had never been done, and they did it, and the ghost stopped showing himself.   Later we got his photo and put it on the wall. 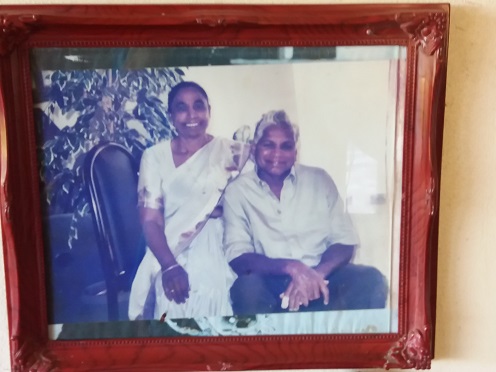 Yesterday evening, Daisy knocked it off the wall as she tried to catch a moth and the frame broke – so it was sitting on the counter.

Last night the ceiling fan came on by itself with no warning.

Guess we better get a new frame soon! 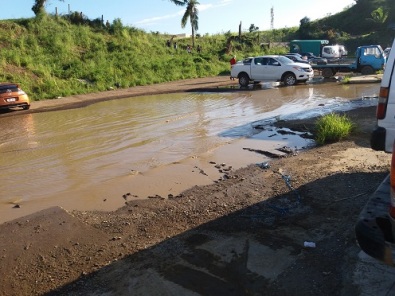 Lake Sigatoka, as my son Akka calls it.  Most people call it the Parking Lot.

It’s kind of a sign how things are going here.  We still don’t have power, still limping along with a generator.  Lots of people have generators – a neighbor is in charge of pumping the water.

Austin went on a campaign to rid the houses of the invasive ants. 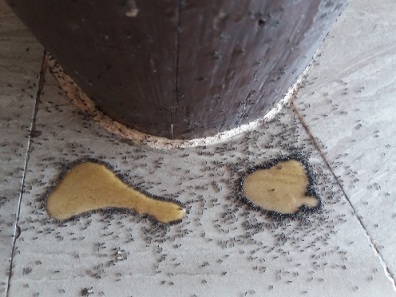 Tiny toxic Lake Austin.  The next day, Austin proclaimed, “I’ve killed TONS of ants.”  Ha ha ha.  I told him I doubted he’d killed even two ounces of ants.  But he had killed thousands.  Tens of thousands, perhaps hundreds of thousands after a few days. 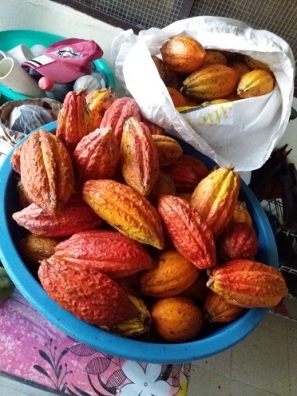 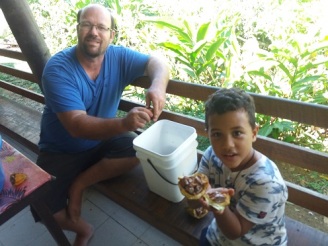 My favorite moment in the neighborhood was close to sunset a few days ago.  I went to visit my friend Lallee, and she had some agitator rigged up. 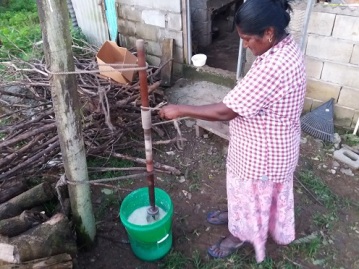 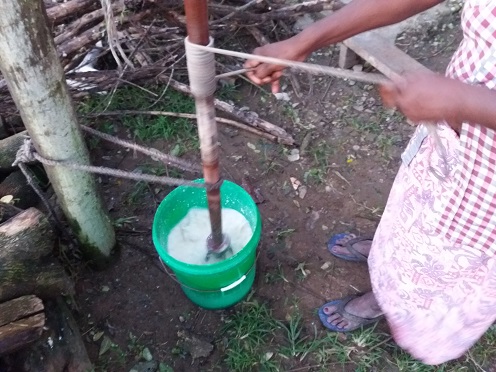 Good Riddance, HAROLD – the hurricane that passed by yesterday morning.

At its height Austin saw roofing irons flying across fields to our north toward our hill.  (For those who know the neighborhood:  our guess is Brother Rao’s porch or chicken pen – and part of it landed in Uncle Jeswant’s coconuts)

Here are a few photos from our farm. 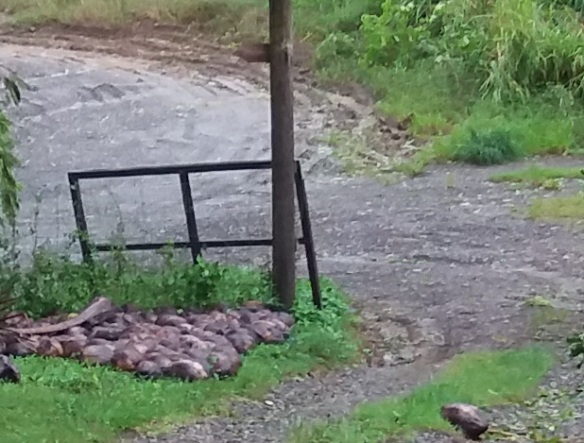 I do a walkabout.  Trees on their sides, branches torn off …. and then I see (oh ugh) 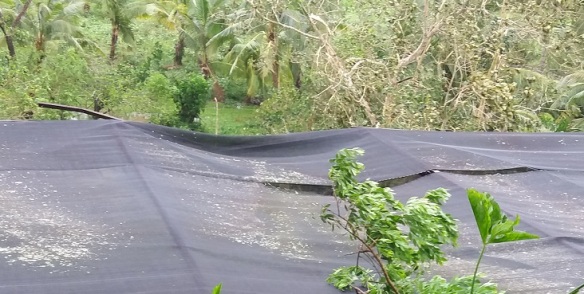 the orchid house:  sticking out beam, and unstitched down the middle with the two pieces of shade cloth flapping separately.   Re-stitching may be a job I can do.

Up the hill – did Akka’s little cabin survive? 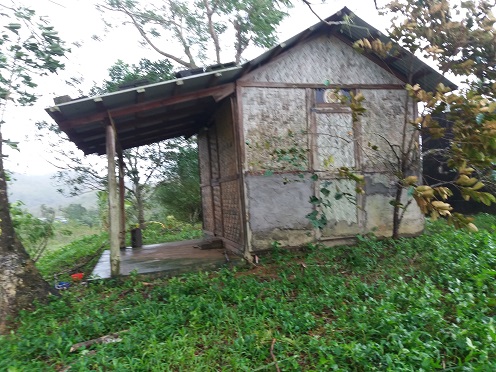 Yes!  By my, isn’t the porch clean.   I wonder if there had been anything on it. 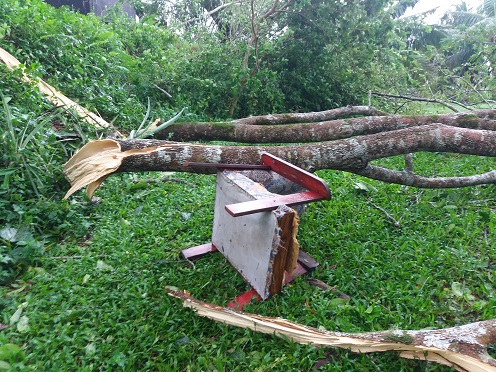 And out to the end of the hill I go – to see if we are at risk for flood. 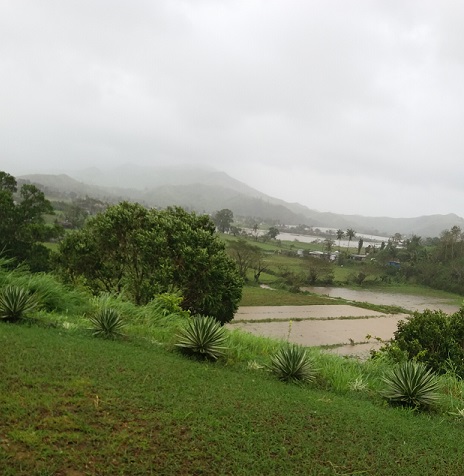 The neighbor’s fields are filling with water.  I can see the river.

I hope the water does not rise further.

This morning:    The river has gone down.  In the valley we are without power.  The neighborhood water tank emptied a few hours after we opened it after the storm, because there is some leak somewhere (darn it), but at least we all have full rain barrels.   The telecom towers seem to still be functioning, and our family can get an bit of time here and there by putting a phone on the car battery and creating a hotspot.  It could be way worse.

If I had gotten the blog out this MORNING – my story of this photo would still be true: 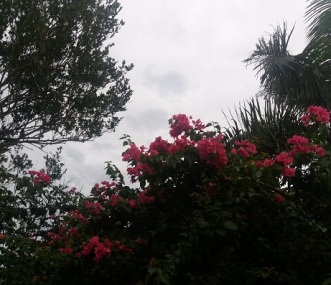 My story: it is gray here, and has been gray ever since we got back on 18 March.  Actually, the sun came out for an hour this afternoon, and is peeking out a little now and then.  But the photo story is still largely true.  It makes drying the clothes difficult.

“Bad news” on the kittens.  They all have names.  It will be really hard to give them away now.

Buttercup is the girl and looks like her mum, Daisy.  (sorry about the poor photo, but you can see her colors well) 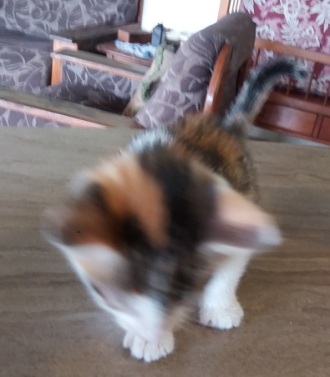 Shadow was named by Kiki – he is Kiki’s favorite. 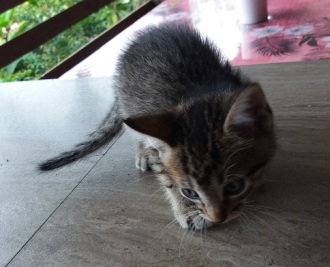 And Marshmallow got his name from Granddaddy because of the color of his ears. 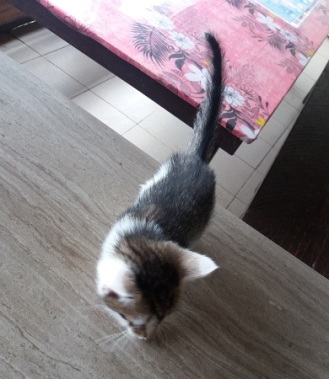 I went down to the pool.  I got some surprises.

Rakesh is working on building the deck to the cottage. 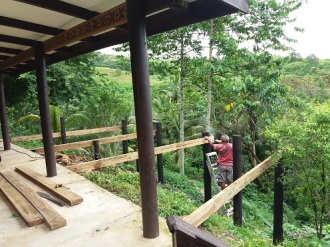 There is FOOD growing in the pool enclosure – those greens are “moca” (MO-tha) – amaranth leaves, yummy like spinach. 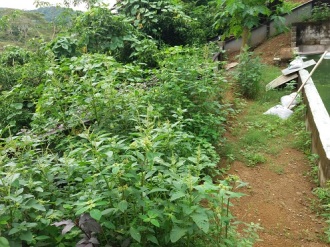 The pool is full of green water, but it is swimmable – as Kiki is demonstrating. 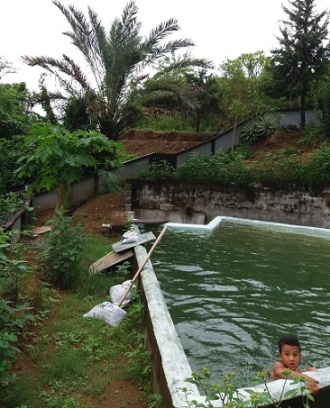 Behind him is another crazy project Granddaddy has going on.  I’ll share photos when it gets finished.

Some really good news today.  After years of waiting for coconuts from Taveuni for a coconut restoration project (they were ordered before Cyclone Winston – so it’s been more than 4 years) …  TODAY Austin got the first batch. 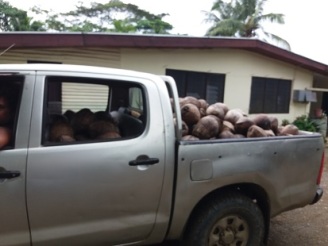 And he can pick up the rest as soon as he arranges a bigger truck.  Hooray.

Finally – something cheerful from the vacation files.

May we all manage a happy week.