It’s all FOOD this week, folks and basically all one meal. – that ended up as a LOT of leftovers.

Tevita, a friend from Samoa, is here, along with two young men: his brother, his son.  (I should have gotten THEIR photo … Now I think of it!  Lordy.)  Anyway – they are here for a big coral gardening and happy chicken workshop, and flights from Samoa as they are, the Samoans arrived several days early.  On Sunday night, the day before the coral work was to start, five people from Papua New Guinea (PNG) were to arrive.  Also we had homestay guests.  Only Ashmita in the kitchen, I was wondering how I was going to feed everybody when Tevita informed me, “We’ll make an umu on Sunday.”

It is the Samoan version of a Fijian lovo.  Kind of.   The umu is the star of this blog – but first I’m going to pull out one part of the umu prep and show it separately

A NEW KIND OF COCONUT SQUEEZER

Tevita’s son was opening both ends of two feed bags.

And then he was packing it with freshly grated coconut.

And then he rolled it into a doughnut and hung it on a branch. 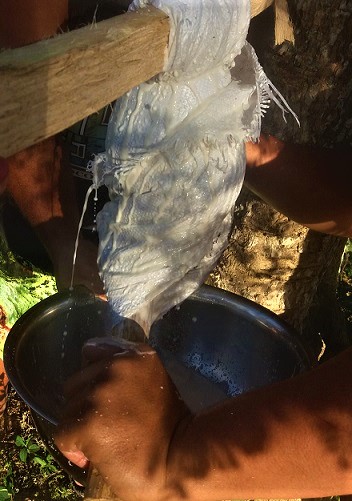 And then he SQUEEZED.   Clockwise and counterclockwise – that coconut was squeezed dry.  Unlike our shade-cloth-and-guava-stick squeezer – this one can be a One-Man Show.

First off, the umu is above ground whereas the Fijian lovo is in a pit.  (The Samoans do have a pit oven called something else, but they usually make the umu.) 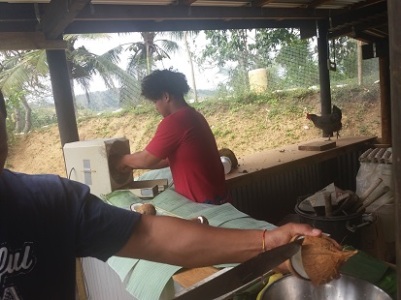 As one person is getting the fire prepped, others are doing food prep.  They carried my electric grater out to the “cantina” – where one person is opening coconuts and the other is grinding. 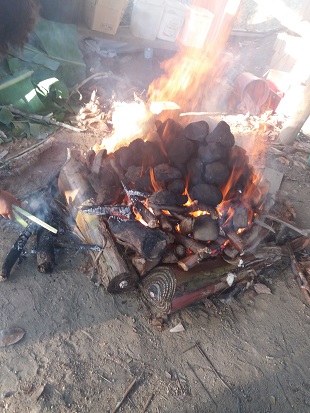 The fire is lit.  You can see how tall they have piled the wood and coconut husks  Volcanic rocks are on the top.  And where some of the wood fell off, you see one of the boys using tongs made from a coconut frond to pick up the firebrands.

The fire is used for kitchen prep as well as cooking.  Here is island-style tin foil – a banana leaf being softened on the fire. 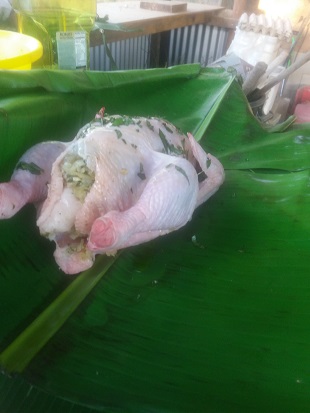 Here is a prepped chicken sitting on one of the soft banana leaves that will be used to wrap it.

Here is the start of palusami.  This is a standard dish in the Fijian lovo as well.  Coconut cream, onions, and secret ingredients going into taro leaves. 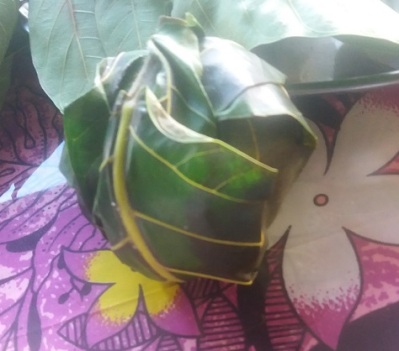 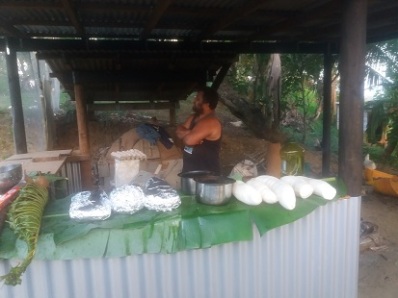 Here is the line up of most of the food that was to go in the umu, and Junia behind it acting like a boss.  The woven coconut leaf on the left has a whole barricuda.  Three chickens with tin foil on top of the banana leaves.  Two kitchen pots of octopus soup.  Peeled cassava and taro.  (There will be more.)

The fire has to be opened out.  Those coconut frond tongs are back at work, picking off the big pieces of wood. 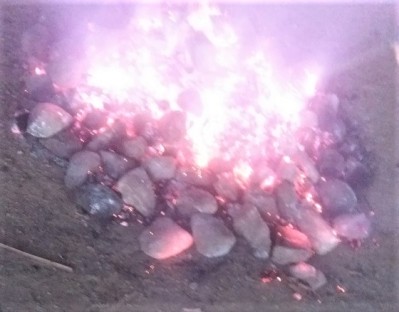 The perimeter is removed and the stone are spread out.  The red hot stones. 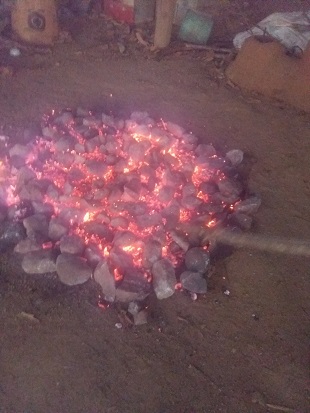 The rocks and charcoal embers are teased so that all the rocks are on top.

And let the packing of the umu begin!   First banana leaves and then the meat in the middle:  3 chickens and one fish. 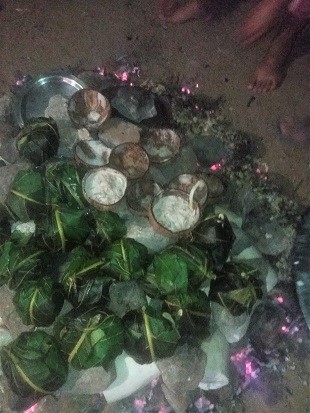 And on it went until here at the top – now by flashlight.  On the top are the palusami parcels – and now coconut shells, being filled with coconut and fish soup!  You also see hot rocks on top of the cassava, becoming a middle layer.

Finally, a blanket of banana leaves.   And now we wait.

But not so long, because those rocks are so hot.  It is only 20 minutes or so!

Here is some of the cassava and the fish out of the umu, with two of the happy cooks.

And here is my plate.

“This looks like Thanksgiving dinner,” said our Australian-American guests.  I completely agreed.

My Australian-American guests and I were totally blown away by Tevita, his little brother Fale (fah-lay), and his son Warren.  How on earth do they pull this off?  Well … we come to find out that Tevita opened a small resort in his village outside Apia several years ago.  They frequently have 40 or more guests.  I googled it.   It looks WONDERFUL.   My guests and I all plan to go there to see it live – and here is a link in case you are interested, too.

Here’s what I have in my phone this week:

I just loved the markings on this young goat.  Never saw one like it.

A kid on a branch.

A little more common, but gee whiz, Kid, what is wrong with solid ground?

A baby in a swing … and therein lies a tale.

The baby is Junia Jr. … actually “Keanu” (not really JuJu).   The “swing” is a frame, feedbag and rope contraption typically constructed by local Indian families – comparable to a European cradle, kind of.   We’d try putting Keanu in the swing, and swinging it, but he’d get fussy and we’d give up.  “We need an Indian mother to show us how to use it,” I said to Nicole, Keanu’s mama.

So a few days ago I was down at their house and so was Ashmita, the Kitchen Angel (and also the donor of the swing).   I asked Nicole’s permission and then asked Ashmita, “How do we use this thing?”  And she showed us.

First of all the baby has to be fed and dry.  Check and check.  Then the swing needs a soft blanket in the bottom.  Check.  A small baby pillow.  Check.  Then she put the baby in and started it moving   When Baby got fussy, Ashmita grabbed the swing at the knot where all the ropes meet and she started swinging harder.  The swing went left and right and back and forth reminding me a lot of a small boat in an angry sea.  It was startling.  Nicole and l looked at Ashmita with huge eyes.  “Are you sure this is ok?”  I asked.   “Yes,” she said – the baby will sleep.  And once he gets used to it, he will like it.  Back and forth and round and round she swung him – like a crazy carnival ride.  After a few minutes his eyes started closing.   “SEE!” she bragged, “he’s falling asleep.”    A minute later he was out.   Ashmita’s final declaration:  “I am an Experienced Driver.”

Kittens in a suitcase.

Our kitten Daisy somehow matured in just a few months, got pregnant, and delivered a few days ago.  One kind soul took Daisy to her bedroom, and allowed Daisy the labor room of her choice: the suitcase (cleverly put the box inside her suitcase).  The suitcase got pushed under the bed with just a small crack for Daisy to enter and exit from.   And now we have the Three Little Kittens.

The word for “sky” or “heaven” is lomalagi.

No wiseguy pointed it out to me, I did figure it out myself … but gee whiz.

Kai   means “person from” or “people from” – so I am kai merika as well as kaivalagi.

The Fijians are kaiviti,  and expressing their indigenous-ness, they are i-Taukei .

We have kai samoa here right now and some kai papuaniuqini arriving soon.

The Farm, The Projects, The Homestay – The Works!

(This took up most of the energy this week, even though I did almost none of it.)

Dophins were jumping beside our boat as Austin and I returned from another trip to Plantation.  I was trying to get my camera open _ “OH – they’ve gone BEHIND the boat now!” … and got neither photo nor glimpse. I do have a shot of the empty ocean. 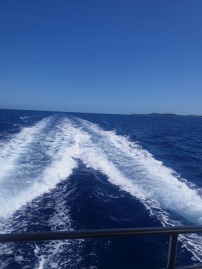 Austin went to Plantation trying to help the coral gardeners with a horrible algae problem – the stuff  has floated in and is killing all the corals in the very large nursery.  Austin made me go out with them:  I got to be a “bag lady,” holding open a mesh bag while Annelise dove down, grabbed handfuls of the crap and then shoved it in.  She said it was helpful.  Sara was going solo on another frame.  Austin was checking currents, planning a fence to catch the algae – and discovering a “nude-ee-brank” (some kind of little critter that bleeds purple) that EATS the algae.  He got a mesh bag of hundreds, maybe thousands, of the little nudibranches and scattered them on the algae.  He also discovered that the farmer fish – who live very far from the coral nursery – will also eat the algae … so there was a possibility of taking the corals that are on ropes over to farmer fish territory for algae stripping.  A last, desperate measure was going to be moving the entire coral nursery (frames and ropes) to a different patch of the sea where the algae would not make an annual appearance.

Good news this morning from the coral gardeners: the algae that was removed has not returned.  So now, it’s just a matter of getting the rest of the algae off before the still-covered corals die.   It is a slow and tedious operation (we are looking at a week’s work for a team of 3), but these genetic treasures – thermal-tolerant branching corals – will be saved.  Whew.

Driving back from Nadi, Austin pointed out the mango trees.   They are exploding with fruit this year.

But not up Valley Road.  Our morning mists have accomplished their usual magic of suppressing mango reproduction.  Darn it.

Lots of time with Austin this week.  We went to Suva yesterday to do errands and buy tools.

I was a bit bored by the third stop, and went into picky-picky mode.

And at our house in Toorak last night – I saw some handiwork left behind by a delightful guest Akka and Monica had.

And made a barbecue out of it.

Monica and Akka say they use it, and it is “YUM”

Our lagilagi has been looking a bit odd for the last week – kind of misty gray – no idea why.

MUSHROOMS ….   are coming out our ears! 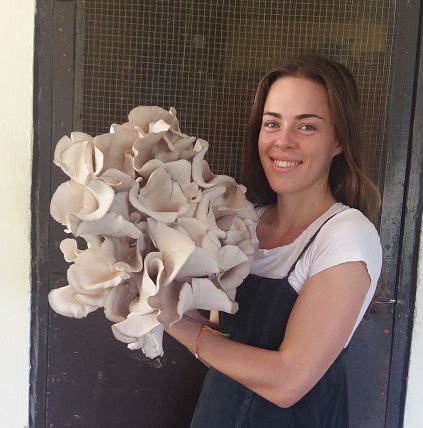 Here is Faith with a mushroom bouquet.  This is about one-eighth of the harvest.  We don’t have a market for the mushrooms developed yet.  Ashmita, the kitchen angel, “doesn’t like to eat them” (we are trying to jolly her into TRYING them).  I hope her father-in-law will take them to market and find some buyers.  Do mushrooms freeze well?

POOJA under the Mango Tree

I have been to many Indian prayer ceremonies, but this one was – by far – the most beautiful, peaceful, inspiring and lovely one I have ever been to.  (Photo does no justice at all).  The big tree is on the edge of the cliff by the Sigatoka River, slowly flowing by below.  My friend’s grandfather first built the pooja place under this tree decades ago, and the current pundit’s grandfather was the pundit who carried out the ceremonies.  Not long before we came here, it was my friend’s father and the pundit’s father who were carrying out these ceremonies.  Now it is farmer grandson and pundit grandson doing the honors.  My friend was there with his son and his grandson.  I wonder how many generations will be able to continue this blessing in this blessed spot.

Or as I say in my American teenage slang “Here come da fuzz.”   I had guests arriving in a taxi one afternoon, and a great big police van was right behind them.  I joked and asked the taxi driver what he had done?!

(Why, oh why, are we getting so many official visitors now?)

The police said they just came to do a routine visit of tourist places.   The sergeant had come 2 years earlier, while the pavilion was under construction.  Ok.   I answered all their questions – price for the rooms, etc.  The sergeant gave me his own number so we could call if there was ever any trouble.  That was sweet.

(You’re going to love it)