Kiki has come back to visit! 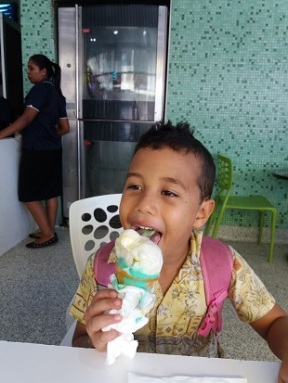 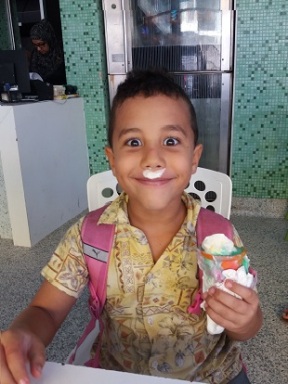 Has nothing to do with flora or fauna – but it is the bright spot of my week, for sure!

The opposite of ice cream:   NONI 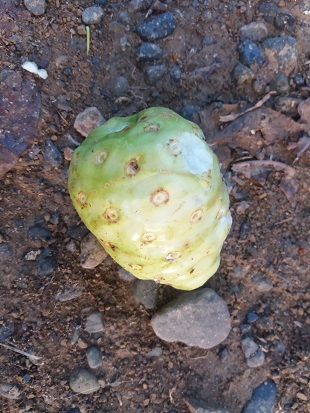 Saw this windfall last week, a noni fruit (kura in Fijian).  A very bioactive fruit used in a LOT of herbal remedies.   Junia’s mother just loved to prescribe noni fruit for all kinds of illnesses.  She’d set a fruit on a glass and let the juices fall drip down as the fruit decomposed – and it is this rotten juice that she’d give.  I took it ONE time – after that just the sight of the fruit would cure me instantly.

OH!  Speaking of healing (this blog is organizing itself nicely for me!) –

One of our guests here heals by doing “energy work.”   She is an engineer by profession, and somehow gets the method of moving energy.   She is happy to work on skeptics – and man, did she ever clear a lot of stuff for me!   Now even I can feel some of what she feels with her hands – it is weird and wonderful stuff.  And it gets weirder.

Here she is working on someone I love several thousand miles away!   And it worked!

OK – Flora.   We have two varieties of cocoa now: 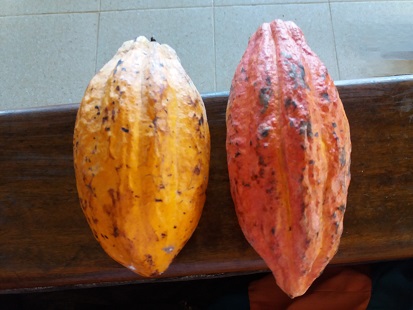 The yellow on the left is what we always had, and the red on the right is the new variety.   The fruit is a little more sour, and Akka says the chocolate from it is even better.   Yay!

And Fauna.   We had a big whoop-dee-do because Biosecurity did find a disease when they came to check.  It is a common chicken illness in Fiji, but we have to eradicate it before we can export.  This irksome disease can be caught bird to bird, and also passed down hen to chick through the egg.   Faith and Nicole did research, and found that some eggs even show a sign.

And here is an affected egg on the right – that bump and pale circle are the sign.  This illness (mycoplasm or something) only makes the birds sick – it does not make mammals sick, so we and the dogs can keep eating up.

When Biosecurity comes back to test the entire flock, we will turn this place into a “best practices” cage-free farm – and I’ll let you all see how that works out.

Kiki came with his first lost-tooth, and was eager to add it to Granddaddy’s tooth jar. 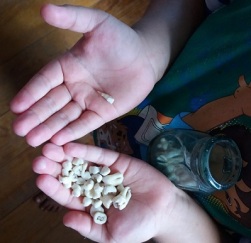 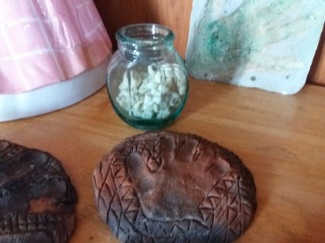 What a collection!  Four generations represented there now.

More on bati.  Honorable Barefoot Professor tells me that bati (teeth) also refers to WARRIORS in the Fijian clan system.   There is one clan whose purpose is to protect the chiefs, and these are the TEETH – the bati clan.

I added a page to this blog – until I get the Teitei Homestay website launched.  Take a look if you like.   Teitei Activities

In June we are in the depths of winter.  It is so cold that enemies snuggle up. 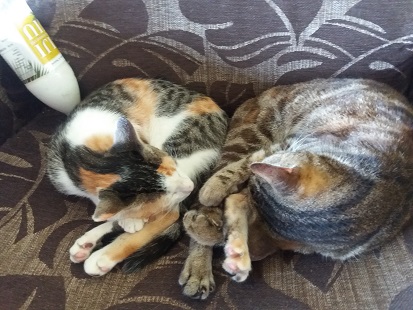 As the coconut oil freezes, Betty suspends her hatred of Daisy and settles down for a nap beside a warm body.

Faith went to work on a moca (MO-tha) patch.  Moca is my favorite local veggie – a wild amaranth whose greens taste a lot like fresh spinach.   It grows as a wild weed – but I didn’t know we had a patch.  Actually, we didn’t.  We had some wild moca growing, and Faith’s plan was to cut down the old stuff and the new growth would be good eating.  She invited me along. 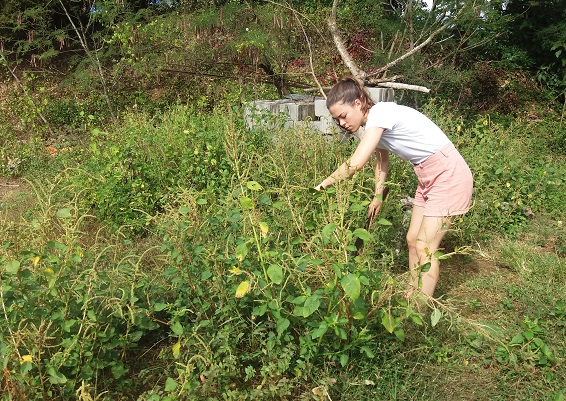 You can’t see from the photo – but this is our campfire spot!   (Been awhile since the last campfire – obviously) 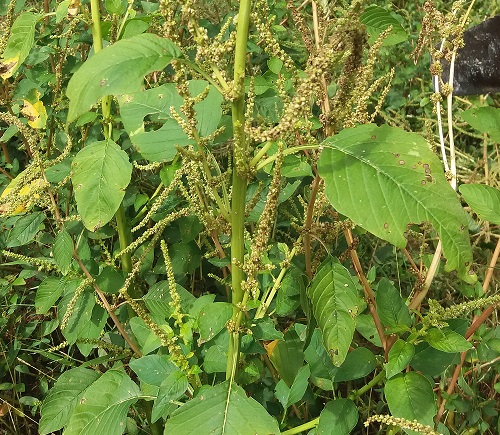 Yep – that is obviously moca – if only I had paid attention.

Then there was the day that the lights went off (pretty normal) and stayed off past lunch (not so normal).  Why?  What’s wrong with the power company now ??? 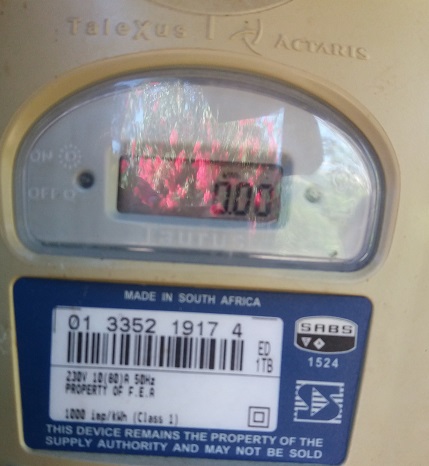 That row of zeroes means we are out of money.  Which I can very easily top up from my phone credit.    Bingo!   Lights and internet are back up.

Austin met with Fisheries for some reason.  He must have told them about the seaweed pie and gel.  Guess what – they had some of that good seaweed growing in Fiji – in a place about an hour east of Suva ! 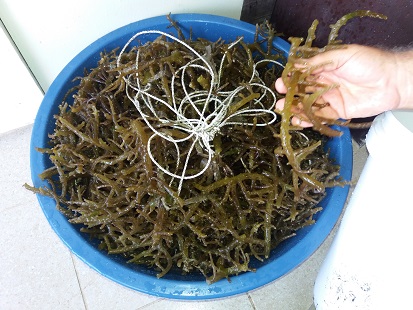 Guess what – they gave Austin a big tub of it to go plant in the Mamanucas (islands to the west where Plantation Resort is).

More on Austin  (no, I did not just say Moron Austin – ha ha)

He had a ZOOM meeting with our friend’s Rotary chapter a few days ago.  It had been in the planning for months.   Beats me why they wanted to meet him so much, but anyhow.   The day before it was supposed to happen, our internet got really unreliable and was still bad on the day.  So Austin got the bright idea to Go High 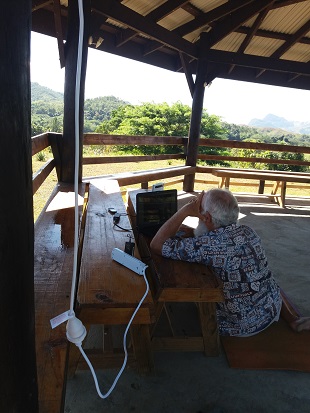 This is him in the pavilion with modem and laptop, sitting on a yoga mat, having his Zoom meeting.   He told me the internet did crash on him a few times, but they had some of his old videos to watch until the signal connected again.    (We actually think the problem may be ants in the modem – the fun of the tropics.)

Faith left.  Has gone back to Oz for a month.  The girls (Nicole and Ashmita) wanted to do the island thing of going to the airport to say goodbye … and they invited me along!

And then Faith insisted on taking us to lunch and having us order whatever we wanted from the menu!   Shocker!  I have never had a $15 drink in my life!  (or a $7.50 one, which is the US amount – still waaaaaaay out of my experience) 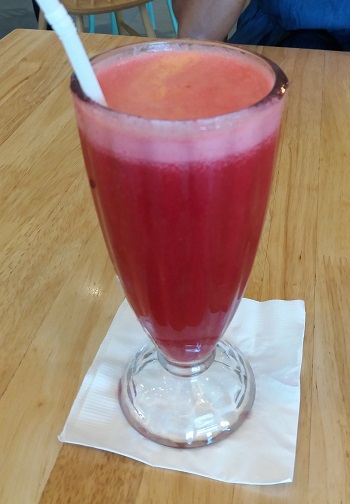 This is what I remember of this week: 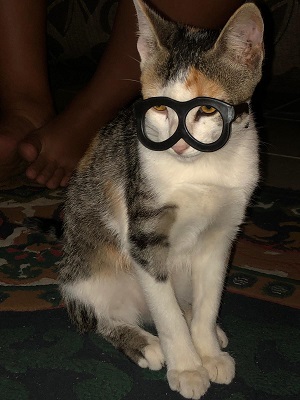 Another great word is daipa (DYE-pah).  Can you guess what that means?

Junia, Nicole and Faith decided to try to turn our beans into coffee  Akka did it a few years ago  Junia and crew did even better. 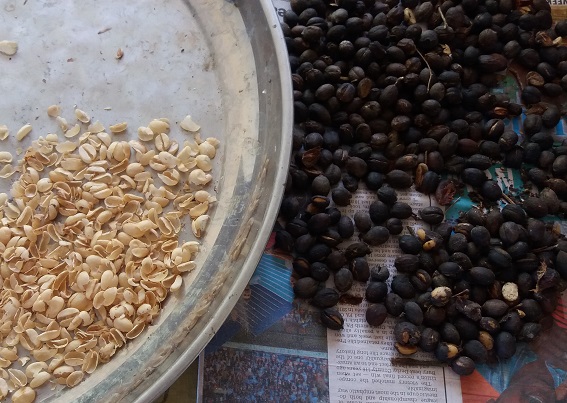 Above are the husks and the beans.  I don’t really know WHAT they did, but at the end, Junia ground it with some cardamom – and WOW that was some really, really good coffee!

This week Austin had Rakesh build Raised Nesting Boxes in all the chicken villas.  Before, the nesting boxes were on the ground and mongooses were getting a lot of eggs.  Somebody noticed that one hen was laying eggs up high – and no eggs were going missing.  The light bulb came on. 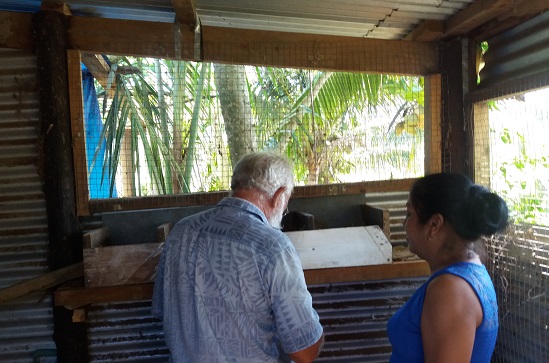 So here are Austin and guest in front of one of the raised nesting boxes – close to shoulder height.  Our egg collection is much improved.

In related news we have trapped and eliminated TEN mongooses in the last month.  One of them was humongous, a different species, and Kula Eco-Park wanted it – so it has a new home.  They wanted the companion female, but our dogs did it in.  If we do trap another female of that species, she will go to the Park.

There is a much better blog about our farm our there – Faith’s Dispatch.  If anyone is really interested in our farm life, I suggest you give her blog a look.    Here is a sample from a few weeks ago:  Faith’s Dispatch 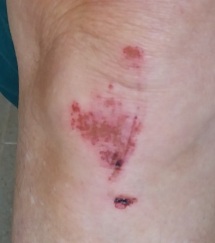 This mavoa happened to some old lady who was walking way too fast on a cracked and buckled sidewalk in flipflops.

It’s funny how useful those words are.