This was the front of our house in Suva, thirteen years ago.  Austin had carved two fern logs into a man and woman in the front. 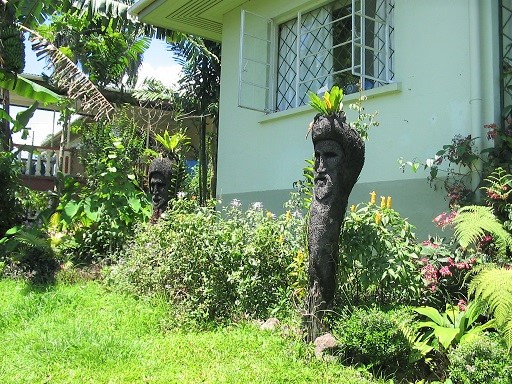 So this week I was in Suva and saw THIS:

The lady carved fern was in her own garden.   So I looked

And the gentleman carved fern was still standing guard at the front window.

“They’re apart but still in the same compound.” I remarked.  Monica, my daughter-in-law laughed and said, “Wait, they’ll be together again.”    yeah.  we’ll see.

Still in Suva – Monica got a new pup

A real sweetie, named June.  She is a rescue dog – with scars on her back from where someone dropped boiling water on her.  Glad she has a good home now. 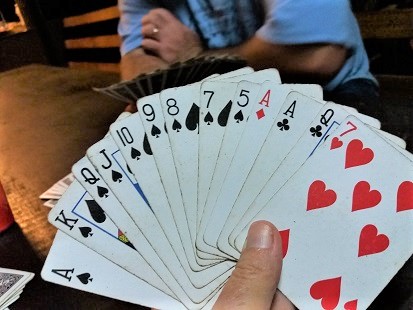 The funny thing about “good luck” in Fijian is that it breaks down into  Kalou – God and gata – snake.   So when you say “good luck” you are basically saying “snake god”

There is a local Christian businessman who tried to finance the retranslation and reprinting of the Bible in Fijian to get rid of kalougata awhile back.  He wanted it changed to kalouvinaka (“good god”) – but people wouldn’t go for it.   So “snake god” stuck.

An utterly brilliant sky in the late afternoon as Austin and I were driving home from the west.  These colors are accurate.  I kept trying to take photos out the window – this was the best one I got.

So …. what were we doing in the west (i.e. Nadi or beyond)?   He had to go to Plantation Island again, and I got to go with him again.  Always fun.

On the way out of Denarau, we spotted this “spaceship” of a boat.

I already knew about this boat, the “Race for Water,” because a couple from the boat had come to be our guests at the Teitei.   Austin was traveling at the time, and I knew that he would enjoy talking with these great folks.  The woman, Annabelle, ship’s second captain, invited me to visit the boat and to bring Austin – any time before they set sail on 19 January.  Here we were, passing by on our way to the Mamanucas on the 17th…..

I emailed to see if it would be ok to see them on the 18th, and while on the boat returning to Denarau, I got an affirmative reply.  YAY!

So we went.  Austin talked corals, overheating seas, plastics and research with a crew member.  I poked around and got some photos.

Looking across the bow, I think.

Solar panels.  This boat uses 100% renewable energy.   Interestingly, instead of a traditional sail, it uses a kite sail – like a kite surfer. 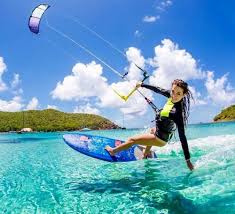 Imagine that!  I’ve seen kite surfers and wondered how they kept the sail from hitting the water.  Bernd, who installed it, told me it is controlled by computer.  Annabelle says the real advantage is that it does not cast a shadow on the solar panels.

And here is Annabelle, the second captain, in front of the boat.

After so much bad news about our pets, I’d like to share a triumphant story from two weeks ago.

When the wonderful German kids were here, a bunch of them wanted to go swimming in the river one rainy afternoon.  Our dogs went with them.   When the kids got back, they told us that our elderly dog Tarsi was stranded on a narrow muddy bank by a cliff and they could not get her back into the water to swim to where she could get out.  She could not climb up and she would not get back in the water.

Austin and Junia went to the river to try to save her.  Now I have mixed feelings about Tarsi, she really is an old bitch – and that is only a dispassionate statement.  She is gray and creaky (“let me put her out of her misery, Mom” says one fellow), she barks all night about nothing, she terrorizes the younger females Po and Winky even though they are her daughter and granddaughter.  Irritating!!!  But the thought of such a scary drowning death … Nooooo.  She deserves a much better end than that.  So Austin and Junia went.

They had been gone for about 45 minutes.   There was lightning and thunder – and all the dogs tried to get in the house.  All four dogs.  Tarsi was back!   I tried calling Austin and Junia – but they had not taken their phones.  Fifteen minutes later they came home, feeling defeated….   She Fooled Them!

FIJIAN  WORD  OF  THE  WEEK

I would have said, “E tiko vei au e dua na i talanoa about Tarsi”  except I don’t know how to say “about something” yet……

A week that was productive in Life, but skimpy in Blog material.   You’ll see.

Here was a lorry carrying a crushed lorry.   An old couple was in the front.  Too junky for repair.  I never heard of anyone hauling one off to the dump, and why were they parked in town?

And that was my first and most exciting photo.

Coming back from town that day, their was the weirdest huge cloud like a pancake. 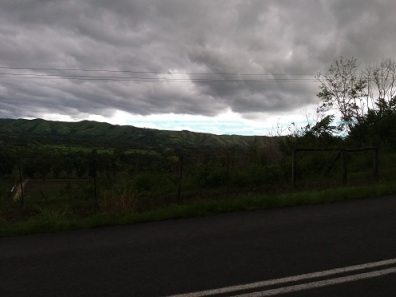 It was so strange seeing the clear edge of the cloud with blue sky beyond.  The blue washed out in my photo so I tried to add it back in.

And rain was the star for the rest of the week.  Yesterday evening I decided to photograph the rain, and got this bat by accident. 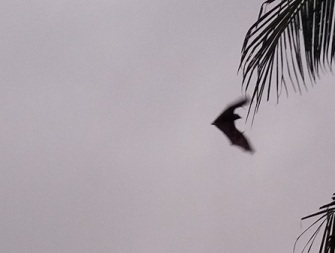 Bats make us happy – we are glad they’re back.  Tropical Cyclone Winston a few years ago wiped nearly all of them out.

So here is a better photo of the rain.

And one lonely bird sitting out in the rain.

I’m really zipping along with the Fijian.  I cracked up because I knew that gaga (NGA-nga) means “poison” – and I was reading the Peace Corps Fiji Language Training Manual and came upon this sentence.

Then I looked at the translation.  “Tastes nice, but it’s a little hot.”

HA – the word for spicy hot (picante in Spanish) is the same word for “poison”  HA HA HA.

I was really happy at the thought of writing this week’s blog a few days ago.   Story to follow.  But first: a lot of fauna and a few flora.

Dr. Smarty Pants caught a dragonfly and wanted me to see the little “basket” made by its front legs.

They use the basket to catch lunch (flies!) in flight. 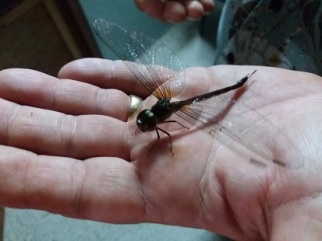 Many species of geckos are all female, reproducing through parthenogenesis (like auto-cloning), but some do have males.   Austin gave more info on gecko mating than I ever wanted to know, but it had to do with the fact that they mate from the side…. 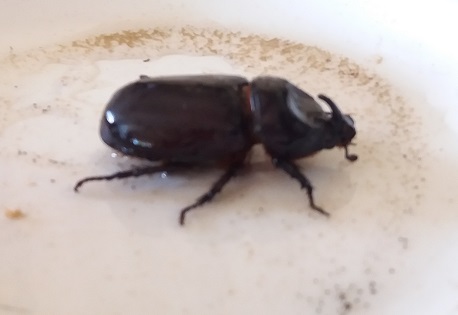 We got the pavilion lamb-proofed, so they visited the porch of the guest cottage.  Oh great.  So now they are confined inside the pool’s wall again.   When the fence to the goose compound is repaired, the lambs and the geese will be controlled.  (maybe) 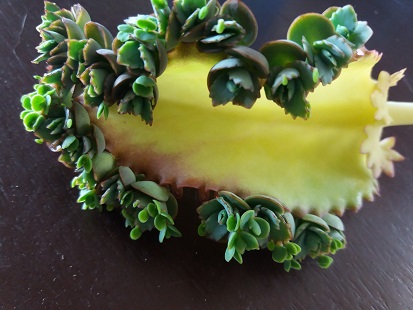 This strange leaf has baby plants around the edge – and the baby plants have smaller baby plants on them.  Reminds me of the Ogden Nash poem:

This photo does not have eye-appeal, but I like it.

In the foreground is eggplant and in the background is flowering okra.  I had to drive into the farm to pick up veggies for a large group we are hosting.  If I did not have 4 wheel drive, I would be there still.

My “sonny boy” Vulavou was visiting, and he sawed the hot bean that was plugging the pool’s exit pipe.  We are one more step closer to getting the pool operational again.

“Love” includes more care and concern than I gave.  In a very avoidable oversight, I left Sparkles vulnerable to the dogs.  Damn it!   So sad – but God willing I will not make THAT mistake again. 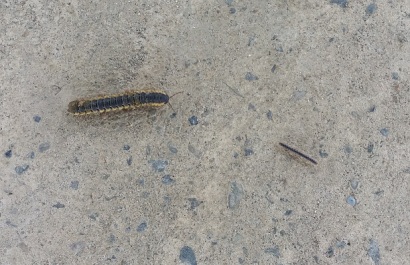 Goliath and David on the floor of the pavilion.   Millipedes love a freshly washed floor.  We had plenty, and were shocked to find them in two sizes.  Adults and kids?  or Two different species?   [Flora and Fauna Weekly Report – the place to go for questions instead of answers….]

On New Year’s Day, Kiki and I took a guest to the sand dunes.  When we were there, I thought “photo op!  Something for the blog!”

My photo – unimpressive.  There is the sea out there, but you have no idea how HIGH we are. 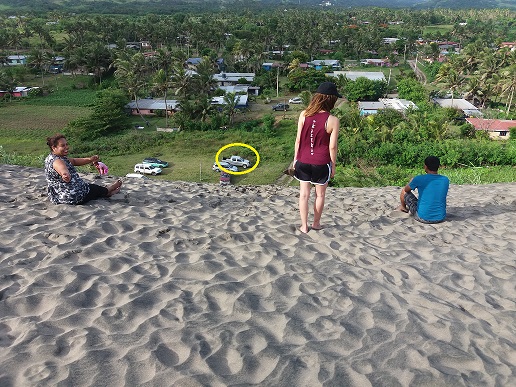 So here – looking back at the place where we parked.   My truck is inside the yellow circle.

Still not so impressive, I know.  So sorry.  What really impressed me (besides the fact that I actually climbed to the top for the first time in 8 years) was this CLIFF sitting on the TOP of the dune. 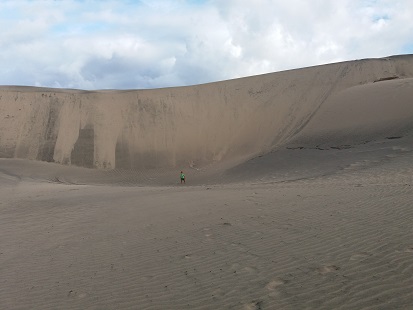 Maybe it doesn’t look soooooo big.  Well, see that speck at the bottom of the dune? 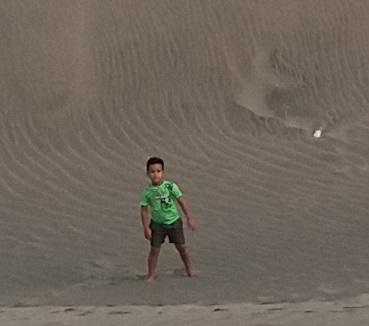 It’s been more than three weeks since Teddy showed his face.  He had been sick.  I didn’t want to spoil the holidays by admitting the inevitable, but they are behind us so now it is  time for a tribute.   Teddy:  the second sweetest – and tie for the oldest – cat we ever had.

Happy hunting wherever you are now. 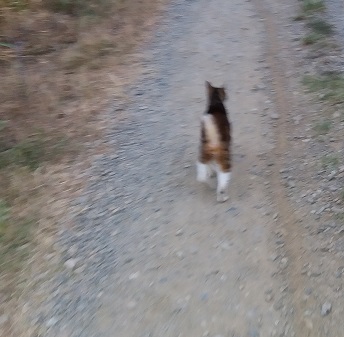 May everyone have a happy and blessed week.