So much for “back at home now.”  I came to Suva for 2 days minus laptop…and am still here minus laptop.  Hence a teeny tiny blog off my phone.

I was sitting in the house when daughter-in-law Monica starts whooping it up.  She spotted a new orchid in the garden here

This lovely yellow one.

Fijian word of the Week

(I forget the word for “yellow”.  Learning Fijian slowly slowly.  “Slow” is vakamalua.)

I arrived Monday morning.  Two guests were leaving, and two truckloads of workshop participants were arriving (six gents from Kadavu and seven ladies from Taveuni).  No time to have a vacation from the vacation.

First thing Austin wanted to show me was his LAMBS 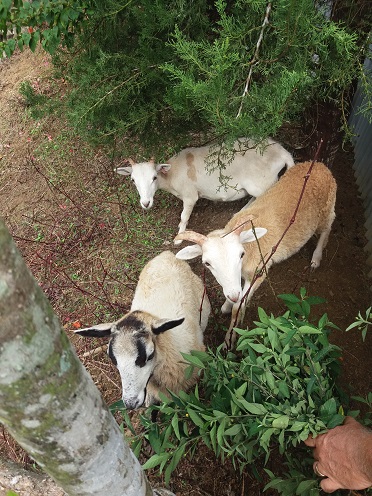 Curly, Larry and Mo (Mo is the girl).   Curly and Larry both have curly fur.  I didn’t realize lambs have horns!  They look pretty much like goats to me.

Mo really lives up to her name (“mow”).   I thought my guys had finally cleaned up around the pool, but it turns out the sheep did it.  🙂

Now Junia and Nicole let them out of the pool area in the afternoons and they are mowing down more of our overgrown compound.  Yay.

Not a Weed (any more)

This is costus – a plant that grows beside the road here, and springs up in gardens in Suva.   Some Americans know it as “crepe ginger.”

(and here is a stock photo of a costus flower) 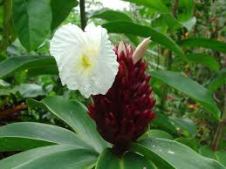 A few workshops back Austin discovered that the chickens LOVE costus, and so he renamed it “chicken cabbage.”   The chickens kept gobbling it up, and so eventually Austin started wondering if people ever eat it.

Surprise!  Vietnamese treasure it as a vegetable – so Austin had to give it a go.

He chopped it up. 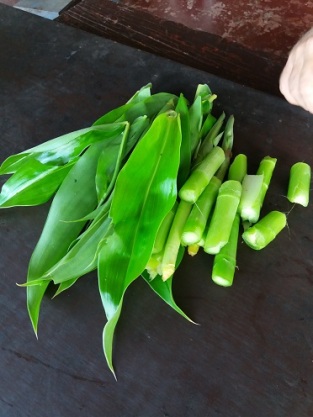 Then he played with it.

Then he cooked it.  (no photo for that)

All I’ve got left is dogs and dog stories.

Here the dogs are all at attention because Austin had a mongoose in a trap. 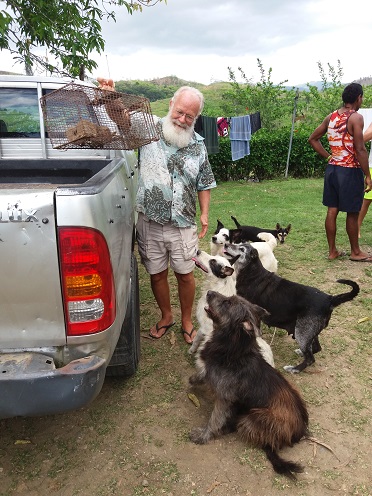 At dinner he complained that the dogs let the mongoose go.  How could they open the trap?  I wondered.  Turns out Austin opened the trap, planning that they would get it, but the mongoose was too clever for the dogs.  ha ha.

And here is my good news corner – the Dog that Did Well.

Remember the little dog we were stuck with in May … and finally our yard-worker Ratu decided he wanted her.  We let her go – but we felt a little sad, because most village dogs  don’t thrive.  Money is tight.  Well, Dino has been trotting over here with Ratu on the days he works.

As you can see, she is looking great!  His family loves her – and keeping her well fed is a top priority.  Gives you a good feeling for the world.

So I’ll give you “dog” instead:  koli.   Think “collie” and you’ll remember.  It’s just collie with a long O at the front.

It’s pretty easy to tell that these animals were introduced to Fiji by English speakers.  Rats weren’t.  Rat is kalavo.