Akka treated us to lunch at the Grace Road Korean Restaurant in Lami last week – and he noticed that the egg on my bi-bim-bap was HUGE.  We needed something for perspective, and Kiki’s head served just fine.  He asked the waitress if this wasn’t an unusually large egg.  Or a duck egg.  No, she said – just a chicken egg and it was average.  Sheesh!  Some average!

There was more digging …. OF COURSE … sadly I do not have any “before” photos of the hill behind the kitchen.

Here is one with the hill mostly still intact.

Junia was competing with the digger.   Not really.  He was saving the plants.

Digger really up close and personal. 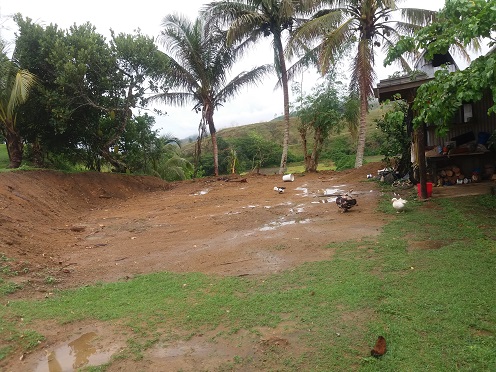 Here it is, done.  (yes, we got rain).   The plan is to put an open hall here, to serve as a meeting area for large groups.

And, as for the fate of the concrete water tank that we never ever used…. 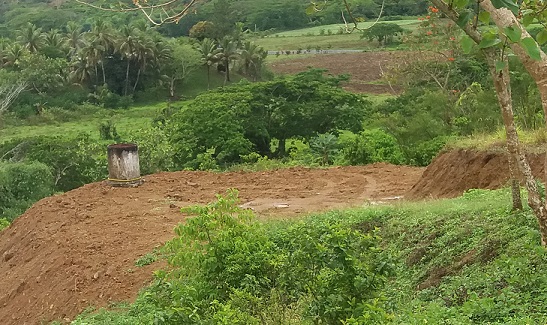 Waste not, want not….. it is way out on a terrace with the intention to bury it and use it as a septic tank.

Other news – I have a friend from California who visited last year, and whose dream was to open a small Monetessori school in our neighboring village.  What persistence!   I had a chance this week to go and see it.

Sixteen tiny tots with two teachers in a small living room.   The children were both peaceful and enthusiastic.   What a joy!

In the never ending quest to go bigger, better, fancier ….(Keeping Up with the Kumars)

… a wedding invitation that is a SCROLL and comes in its own BOX.  (Akka was hoping the box had chocolates.)