You may not know what this means, but I should have. 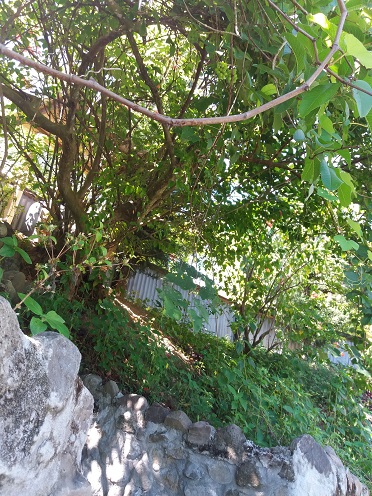 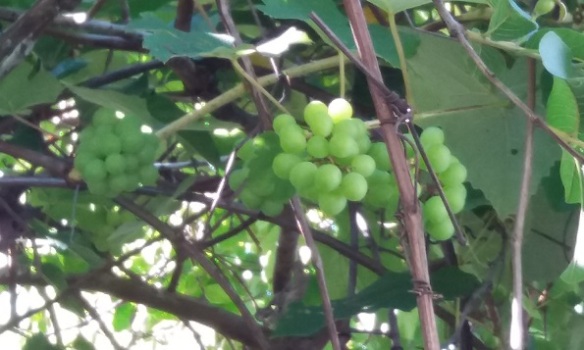 I was raised in a vineyard from age 8-12,  I spent my summers picking, cleaning and packing grapes, and even one time stomped them when Dad tried making wine with the encouragement of a Greek townsman.  (Update:  the Greek’s sweet wine turned out fine; Daddy’s bottles of tan dreggy vinegar sat under the house for the rest of his life..)

That’s it for Flora and there is no Fauna … but something came up this week that leads to a tangential topic….

TWO GHOST STORIES ….   these are NOT made up.

ONE – When Austin and I bought our house in Toorak, one of our neighbors – Etta – left for the US to work a few months afterwards.  Her husband – Fotu – was a wonderful neighbor to us.  Etta was working in the US and sending money home, and she was gone for years.   I was really happy a few months ago when I saw she had come home.  Austin and I were in Suva for the day and we saw her.  Etta had come down from her house and was in the road as we got out of our truck.  Austin and I spent a few moments exchanging pleasantries with her. Then a few weeks ago we heard she was back in the US and she died.  When Austin saw Fotu last weekend he gave our condolences, and mentioned that we were sad Etta had gone back to the US, that we had been so happy to see her here recently.   “That could not be,” he said.  “Etta never came back from the US.   She was not here.”   Austin’s conclusion: we were talking with a ghost.**

TWO – When Austin and I bought the farm, the price was amazingly low … and that is because the house was haunted.  Jai Karan, the owner, had killed himself in one of the rooms, and then the son-in-law got cancer and died within two years.  He didn’t die in the house, but he was dragged from the house kicking and screaming because he didn’t want to leave.  One of these fellows was believed to be still hanging around: lights would go on without explanation, and so on — it was enough to put off the neighbors who otherwise would have bought this place.  When we moved in, they all just waited to see which one of us would get sick and die first.   It didn’t take Austin long to realize the place really  was haunted – he has felt and seen ghostly figures around him since he was a boy, and he started seeing the ghost.plus a few others.   The ghost was still up to his lights trick.  He played with the radio.  (This was all before we moved here full time – and when I was here, I never noticed anything odd.)   Anyway, Austin just prays for ghosts and befriends them and doesn’t worry about it.  A number weeks passed without the ghost showing himself, and then came the kicker witnessed by three people:  the boys were playing a CD of Hindi music when Austin arrived and said, “it looks like the ghost is gone” – at that very moment, the CD got stuck voicing  “lahsoo…lahsoo…lahsoo” – which is Fijian lasu lasu lasu – liar liar liar.  Freak out!   So Austin had another chat with the ghost, assuring him that he was always welcome and he didn’t need to waste the energy to show himself.   Finally he realized that part of the problem might be that Jai Karan had never had his final prayers.  Austin asked the pandit to come, but he said Austin could do it – just take the prayer place apart and put the articles in water; so Austin and Michael lovingly dismantled the prayer place, took the articles to the river and said prayers for him.

We really love the former owner, because he put so much love into this land it has made it easy for Austin to continue developing it.  After awhile Austin was really curious what Jai Karan had looked like – was it the person he had seen as a ghost?  He asked the daughter if he could see a photo…. and the family sent us this framed photograph!   Austin says, YES – that’s him.

We have this photo hanging in our living room.   Isn’t he a sweet looking man?!  If you’re going to have a ghost, it is helpful to have a sweet one.

** Anyway, reanalyzing story one – to hear Austin tell it, he and I both talked with a ghost in broad daylight.  Austin, maybe – but me?  I don’t think so, even though I KNOW what I saw!  Finally I came up an alternative explanation:  perhaps Austin and I saw someone in the street who looked just like Etta, and perhaps being Fijian she was too polite to tell us that we were mistaken.

And to those who enjoy it:  Happy Halloween. 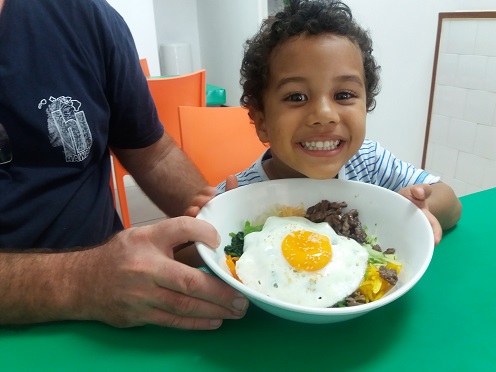 Akka treated us to lunch at the Grace Road Korean Restaurant in Lami last week – and he noticed that the egg on my bi-bim-bap was HUGE.  We needed something for perspective, and Kiki’s head served just fine.  He asked the waitress if this wasn’t an unusually large egg.  Or a duck egg.  No, she said – just a chicken egg and it was average.  Sheesh!  Some average!

There was more digging …. OF COURSE … sadly I do not have any “before” photos of the hill behind the kitchen.

Here is one with the hill mostly still intact. 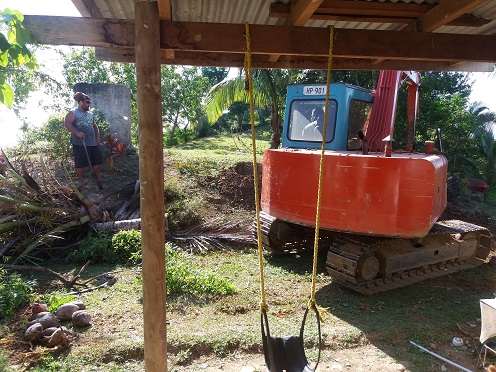 Junia was competing with the digger.   Not really.  He was saving the plants. 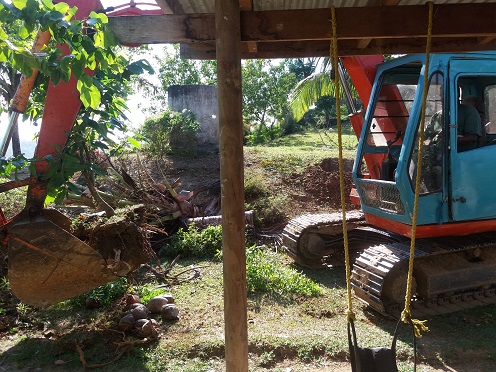 Digger really up close and personal.

Here it is, done.  (yes, we got rain).   The plan is to put an open hall here, to serve as a meeting area for large groups.

And, as for the fate of the concrete water tank that we never ever used….

Waste not, want not….. it is way out on a terrace with the intention to bury it and use it as a septic tank.

Other news – I have a friend from California who visited last year, and whose dream was to open a small Monetessori school in our neighboring village.  What persistence!   I had a chance this week to go and see it.

Sixteen tiny tots with two teachers in a small living room.   The children were both peaceful and enthusiastic.   What a joy!

In the never ending quest to go bigger, better, fancier ….(Keeping Up with the Kumars)

… a wedding invitation that is a SCROLL and comes in its own BOX.  (Akka was hoping the box had chocolates.)

If you remember the newly cut road from last week – turns out there  is a very good clay deposit.  My clever fellow has done pottery in the past, and recognized the potential.

He brought some to the the house, where he and our 5 homestay guests played for a few hours making figurines.  Now they are nearly dry and most are intact.  The clay is quite hard. 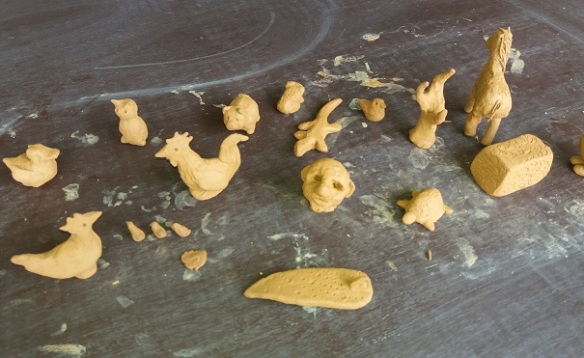 Here’s my favorite – though the photo isn’t very good: 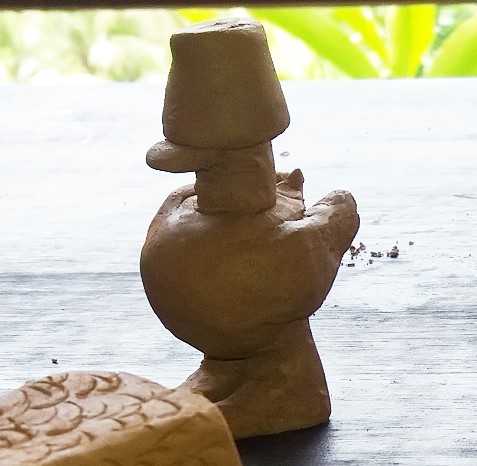 a duck with a bucket on its head!

Does Gogo look guilty to you?  (wag wag wag wag)  Well, he is.  He’s been terrorizing the neighbor kids as they walk to school.

We bought him a strong leather collar – bright red – snug.   He wiggles out.  Gets off his night-chain.  Leaves our property.  And doesn’t just go to the fork in the road …. he goes all the way to the detour the kids devised to avoid him.    Baaaaaad dog.   I’m embarrassed.  I want to fire this employee and find him a new owner.

But oh, the lengths my soft-hearted hubby will go to ….. 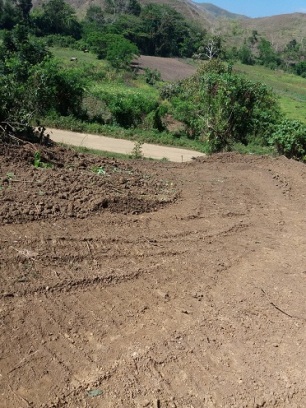 He got the DIGGER here – again – and has put in a road, up around the hill that is Pineapple Circle.  It’s probably three times the length of our driveway up to the house.  the picture on the left shows that it really connects to the feeder road.  The photo on the top right is looking out from one of the curves.  The photo on the bottom right looks up to the tree that is beside Beamer’s grave.   For me it was a tidy little hike.  For hungry young men, it is just a little hop.  Nothing.

So here (as I see it) – we have a problem – new, easier access to our chickens.  We also have another problem – Bad Dog going out the old access to be a neighborhood pain-in-the-butt.  Perhaps 1 Problem + 1 Problem  = 1 Solution.     If we get Gogo securely stationed on this road – he’ll be away from the kids, and he’ll protect our back door.   I’ll let you know how that goes.

The GOOD news this week is that the tamarind tree is full of fruits, and I’ve invited the neighbors over to harvest all they can.

The GRIM news was in the newspaper this week.   Front page:

The headline was “Night Fright” – and it was about thick swarms of termites filling the sky.   The inside story:

More details of the same.  The scariest to me was people saying they could HEAR the termites eating the wood on the inside.   I can imagine it too well.   Poor them – and if the bugs spread, poor all of us.

Love to everybody.  I hope you have a happy week.