From the balcony of Clara’s 17th floor apartment one thing that strikes me is how many roofs have solar panels.   At least seven in this photo – and I saw about the same amount everywhere I looked.   This is a great development. 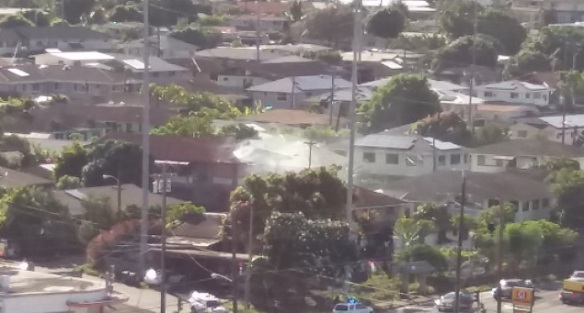 Austin got us an invitation to visit a coral restoration facility on Sand Island.  Normally I expect tours like this to be a big snooze – but I really liked this place.

Here is a big aquarium outside under shade cloth.  On the right you can see corals growing on hanging  lines. 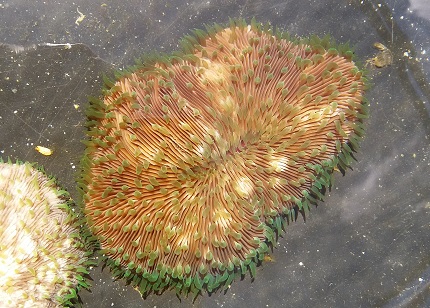 In a flat tank outside lives this mushroom coral.  I’d only seen dead ones.  I like the little green tentacles coming out, and was surprised to learn that the long valley in the middle is its mouth. 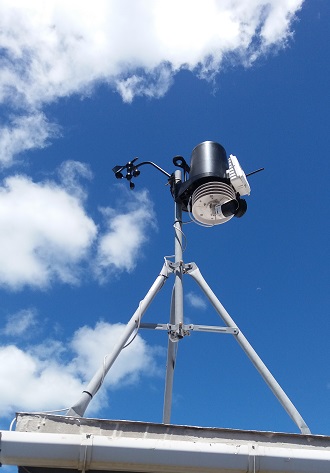 They have their own weather station.   Then we went inside.

Some Guy -“Did you just take a picture of the cactus?”  Me:  Yes.   Him – “WHY?”  Me: Uh, because I write a Flora and Fauna weekly report and I needed some flora.   The girl with the desk beamed.

Ooh.  Pretty!   (oh Geez – Austin just told me that this is WORM, and the feather duster is its feeding apparatus.)

To me this looks like a pastry display.   One thing I  learned in spite of my quest for ignorance is that the triangle bases have a specific long-term purpose.  When the corals grow and fuse, they are positioned back-to-back as a large square, and then they fuse into a pyramid that is then relocated to the reef.

This is a tank of rare Hawaiian corals.   Every tank has ONE fish inside, but also some snails and little crabs – they are the sanitation department, eating algae etc. 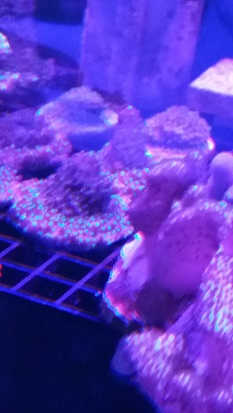 One of the lab techs then played with the lights so that we could see the fluorescence in this tank.  It was a great little light show – but this was the least fuzzy of my photos.

My favorite:  wearing fringe to prom night!  (Tubeastrea, for those who want to know)

And off to the lab of the mad scientist – bubbling flasks of strange “coral food” (I wanted to put this in as a gif, but don’t have the skills yet.)

Ha ha.  I asked the Boss of this office what this was – he said a student made the drawing to illustrate some point:  thermometers are inaccurate.

Sign says “Do not dump anything hazardous – drain goes to the ocean.”    And  there it is.  It reminds me of the kitchen sink at the farm, going straight out to the avocado tree.

Coming up next week – trip to an Eco Dairy in Canada! 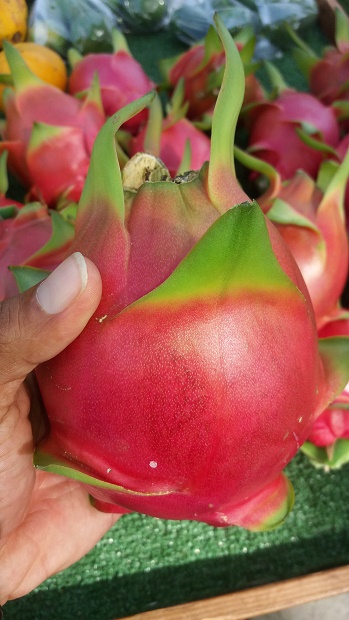 Our of the house a bit more this week – Clara and I went to see her former classmate give a Magic-and-Origami show for preschoolers at the local library.  It was charming.

Here he is performing the story of Peter Pan with a green crane Peter, a party shop Hook, and a large origami boat.  He had many more props, tricks and ideas.  Inspiring.

And now for the BIG trip out of the apartment!   It all started with Austin overhearing a man on the plane talking about doing chocolate production on some Pacific island.  So he eavesdropped (of course – anybody who might help Akka pursue his chocolate career is somebody worth listening in on).  Afterwards, he introduced himself – and got us invited out to a farm this week.

So here are da guys.  Left to right – John, Austin and David from the plane.   As I got it, John and a few others have like a government lease on this wonderful farmland and have been here for many years.  David lives and works elsewhere, but sharecrops his cocoa on this farm. John and friends are all working on the clean up and protection of the local bay as well.  (Guess who didn’t take any notes.)

This is that Bay’s group’s spin on some popular logo of “defend Hawaii” with a machine gun.    Kūpale might mean “independent” …. I’m not sure.  But either way, having enough local food to feed all the resident and visiting mouths is self-reliant in the most satisfying way.  (For all my diets, starvation has zero appeal.)

Man, were these delicious!  This is some variety of heritage tomato – and is so sweet!  Who’d have guessed.

There were trees dripping with kavika (in Fijian), called Palauan apples in Palau, and mountain apples  elsewhere.

The cocoa was amazing.   Pods so red.  Big, too:  these end-of-season pods were noticeably larger than ours, but David said they get much larger still.

Here was the star of the show – though it didn’t look like much to me.  Taro growing in ponds, and the fresh water is on some kind of flow through system.  This is called a lo’i kalo patch.  It is the only way they grow taro in Hawaii – ancient technology.  Austin thinks is is the solution to Fiji’s taro beetle problem. 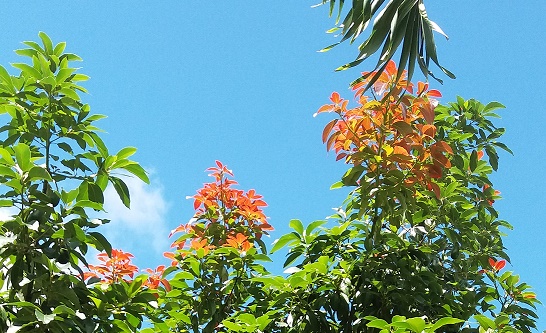 And a shot that Austin told me to take because the leaves were pretty.  I don’t know what tree it is.

How many weeks have I been at Clara’s so far?  Maybe five?  Anyway, in all that time we never had uninvited fauna.  But this week I’m pretty sure I heard Austin say something about how if he lived here, he would tame some birds. 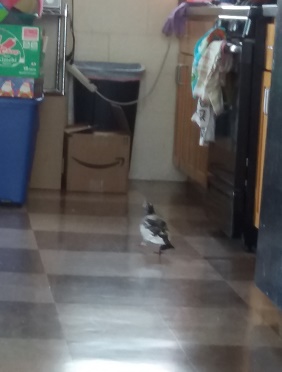 **  PS – that second photo from the top was a Pearl Dragonfruit!  That is something that Austin has growing at the farm, but it has not fruited yet.

Things have gotten more interesting here in the apartment in Hawaii, because my honey just arrived here.   He stopped in Christmas Island on the way.  (For the record, it is acually Kiritimati Island in the local spelling, where ti = s).  Austin went there to do some coral work.

Only there were NO CORALS!

The most abundant reef in the central Pacific was dead, dead, dead.

On the third day of the team’s coral hunt … 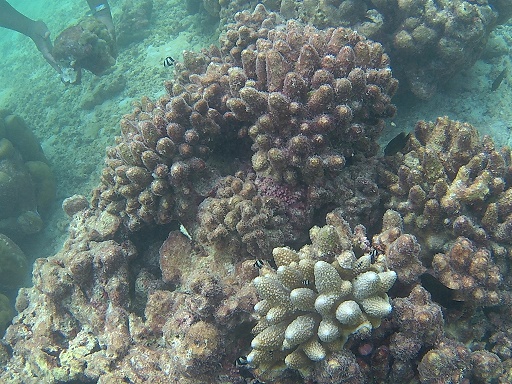 Ta da!  One live branching coral – the whitish looking one in the foreground.   In the course of another day, Austin and team found a few more …. for a total of 2 acropora and 4 pocillopora (not sure about the spelling of the second one..)    In any event, six is marginally better than zero.

And put the cookies on the coral table to start a coral nursery.  This is work that Austin has done over and over again.   May God protect these exceptionally heat-tolerant “coral-seeds.”

More news from Christmas is that they don’t have many vegetables growing there – Austin was starved for greens.  Then he realized they have an edible seaweed they didn’t know about. 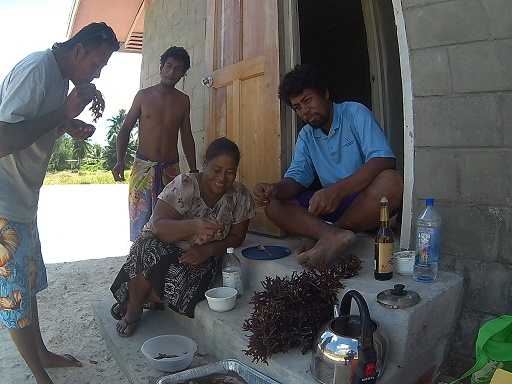 Ta da, again!   Here he is showing his new friends some new food.  It is a bit of an acquired taste… and they acquired the taste really quickly!

Well, Friends, it was slim pickings again this week.  The ONLY thing I saw of interest in the last seven days was this digger and dump truck 16 floors below me, tearing up a sidewalk.   I’d never had an aerial view of a dump truck before, and also was mystified why someone ordered the removal of perfectly fine sidewalk.

The better news for whose only online connection to our family is this:

AUSTIN’S  TEDx  TALK WAS POSTED ON LINE THIS WEEK!    Here is the link:  Austin’s Talk      Austin does a good job of explaining the connection of coral reefs to the health of the whole planet, and offers hope and guidance for preserving and restoring reefs. 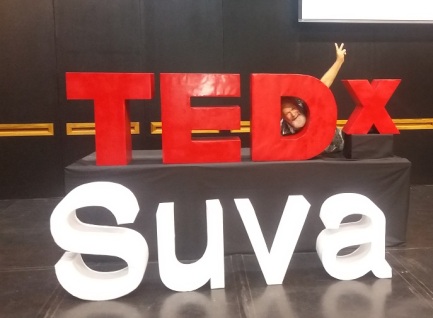 I am going Stir Crazy.  I have not been out of the apartment complex since the baby has come home!

What have I been doing?   Well, there is Project Runway.  There is Netflix.  There is Facebook …. and there is Jamberry!

Every day a new look……  it passes the time.

…. and then yesterday, Clara and I go downstairs to pay the rent.   There is news in the Tower News.

But what the heck are Tower Gardens?

We go to another office to get Clara’s new residence card – and looky here!

I just heard about this five minutes earlier!

Ta da!   This one is full of salad greens and cucumbers!

And Samuel, the nice carver I met on my earlier trip, is around here somewhere, because this office had a number of beautiful sculptures he has done.   I will keep looking for him.

I’m going to close with the website for the nail wraps that have brought me a lot of joy while I’ve been cut off from my usual outdoor existence.    Clara’s Jam Page

Have a happy week, y’all.