The brownest egg any of us ever did see, and it belongs to one of our chickens.  It is a small egg and so we can assume our hen has just started laying.  Oh how we hope she will turn out to be a good layer and that we can breed for these rich looking eggs!

The only other good news this week was that I saw three lambs on Valley Road.  Lambs!  But the driver kept going and I didn’t get a photo.

Now for the bad new (not news to anybody who is a Facebook friend of my hubby):

We all caught pinkeye from Kiki who caught it from a guest last weekend, and look like extras in some Halloween horror extravaganza.   Austin posted a photo of his eye on Facebook; I think these glasses are gruesome enough.

The public health spokesperson has asked all infected persons to stay home – but sooner or later, we run out of food.   I went straight from the car to the nearest shop to get dark eyeware.   And then I joined the throngs of Cool Folks in Shades on the street and in the stores.  It’s an epidemic of discomfort and inconvenience

Thank God it isn’t something that blinds or kills. 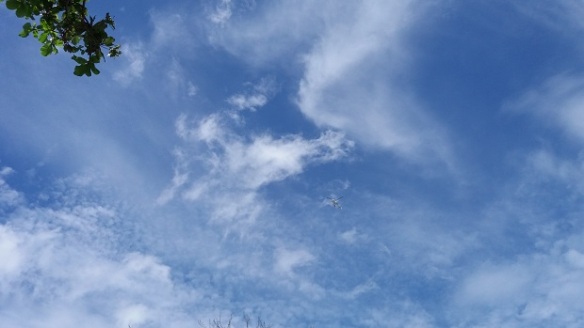 Find the hidden object!   Answer will be at the end.

I do have a bit of fauna news and flora news this week.   First the little tragedy yesterday. 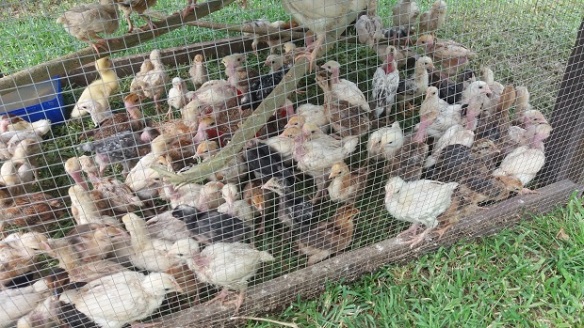 The chicks in this cage are 2 and 3 weeks old, and are not so smart. 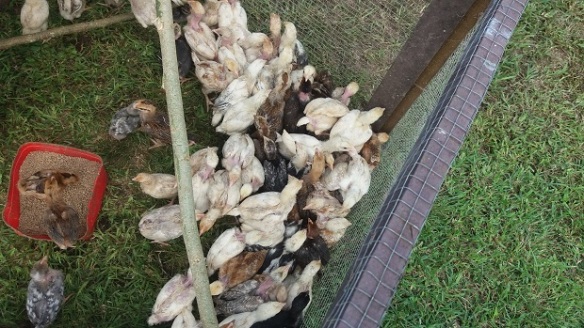 See how they huddle when scared?  Well yesterday we had a sudden deluge, and by the time Austin arrived, NINE chicks had been suffocated by the mob.  Not drowned.  Suffocated!    Killed by fear.  Oh well.

They’ve been using it for a few days – here is where it was yesterday.  I didn’t find this pen remarkable, but they both mentioned it to me.   According to Ju:  It’s easy to make, easy to move, accommodates three times as many birds, and uses less material than the pens that take half a day to make.

Flora Time –  The ironwood tree  (in Fijian “velau”)   This is only found in Fiji, and now ours is making seeds.  Weird seed – not quite a cone.J 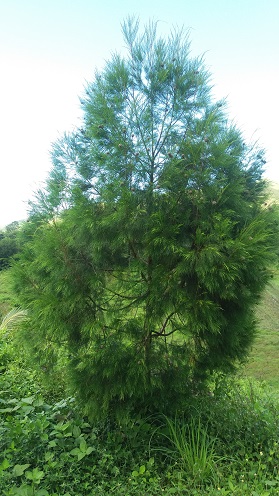 Junia said the growth of these trees is really impressive – it was shorter than me when it was transplanted last year. ….  (Akka chimes in “You have to have a picture with you in it for scale.” ……    UGH!  ….  He grabbed my camera……  oh the shame…..)

So yeah, the tree has grown (and so have I) – and there is the five-minute chicken pen from another angle.

I was wearing the raggiest rags I’ve got because I fully expected the neighbor kids to come throw powder all over me for the festival of Holi.   They have not arrived yet…..

I close with the answer to find the hidden object contest from the top.

Yes,  the helicopter really is in the top photo.  I tried to get it and thought I didn’t, but ha HA, I DID!    This was the best photo I took from our  “happy new year” picnic at the beach this week.

It’s been a wild week – so there will only be two stories, told in three parts, and all relating to the panorama photo from our dining room.  Note the two yellow circles.

STORY NUMBER ONE:  Remember I told you about the BAMBOO CANNONS last year during Diwali?  Well, we got a battlefield earful last week. 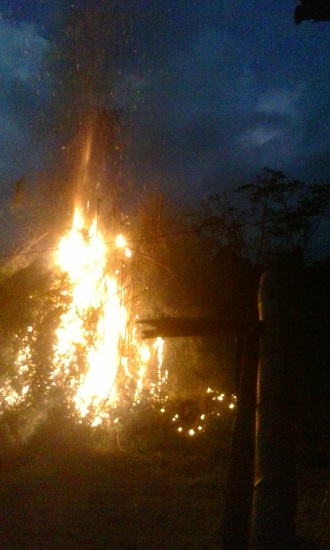 On 8 March our neighbors set fire .to a stand of bamboo  It was so dramatic – flames shooting sixty feet into the air, with the ka-POW ka-POW ka-POW of exploding chambers.   Of course our dogs also went crazy, jumping over the gate to get into the house and hide in our shower room.   Austin was yelling at me to get my camera, which I didn’t.  This photo is courtesy of my tech-savvy 16 year old neighbor who also got a video of the burning bamboo spectacular.

STORY NUMBER TWO:   Once upon a time I was an RN.  I even worked in an emergency room on night shift for my first year out of school.  As far as I know, I never actually saved a life….. 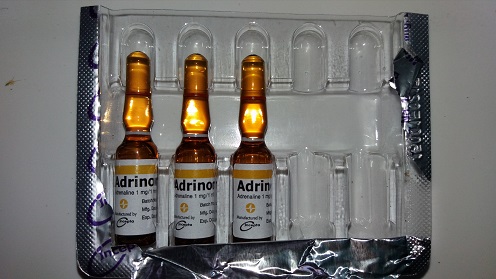 … until 11 March – when a delightful, fit, 22-year-old guest went hiking, and got 19 or so wasp stings and went into anaphylatic shock, and would have been DEAD before we got him to the hospital if we had not given him shots from the two vials missing from this photo.   (He has recovered; I am still in shock.)

STORY NUMBER ONE (cont’d):   I saw the burned out bamboo – it was only 20 meters or so from my neighbor’s house!  Sheesh – I would have freaked out so much with that big a fire so close to my house!

So I asked my 16-year-old neighbor why they burned out the bamboo – why didn’t they harvest it to use it?

He said they couldn’t.  It had big hornets’ nests in it.  That is why they burned it out.

So let me show you that top photo again:

Burned out bamboo on the right, site of the “wasp attack” 3 days later on the left.  Coincidence?   I think not.

It’s just about chickens this week.  I’m trying to get used to my new camera (a phone – why drag around the old camera if the phone actually takes photos?)   Here are a few chicks in a mobile rearing pen that are two weeks  old.

And here are older chicks – two months old – in a different pen.

These remind me of Austin’s ongoing efforts at cyclone relief.  According to one Australian friend who has lived in Fiji for over 40 years, the pattern invariably is that three months after a big cyclone, the relief agencies are long gone and the cyclone victims are out of relief food and then they get REALLY hungry.  He’s happy now that most of his babies have not sold.  He wants to send out larger chicks that will survive better with less intensive care, and be laying within a few months.  The older chicks will be able to be totally free-range, finding all their own food.

Austin has some grants and donations for the chicken work.  One of the outputs is supposed to be a new chicken house that will meet qualified exporter standards.  I was wondering what was taking so long so today I went and took a look.

If the workers get it finished instead of getting themselves killed.  Here is one gutsy worker on a tall ladder cutting off the top of a post with a chain saw.

Wishing you all a happy week.

What on earth is this?  An Indian wedding in the papaya field? 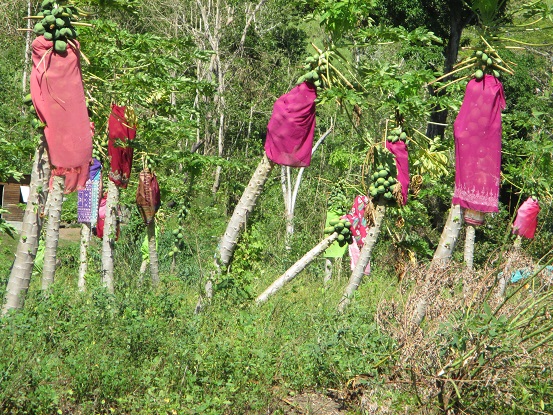 Just about.  It seems some Indian farmer (perhaps now a divorcee) cut up his wife’s saris to keep the papayas from getting sunburned, since the shading leaves got blown away by Winston.

More Winston fallout – our cinnamon tree in Suva went down.  So Austin cut it into logs and brought them home to the farm.   Here he is scraping the outer bark off. 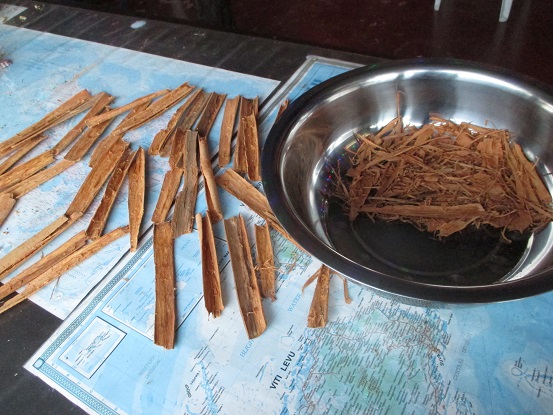 Then the inner bark is cut off in strips that will curl.   And THAT is cinnamon sticks.

Last of the post-cyclone items this week:  my Laundro-Spa!   The creek was not appealing the week before because it was so muddy – but by last Thursday afternoon the water was clear and clean.   Aaah……

Truly a fun way to spend a morning – both for me and for my young grandsons. 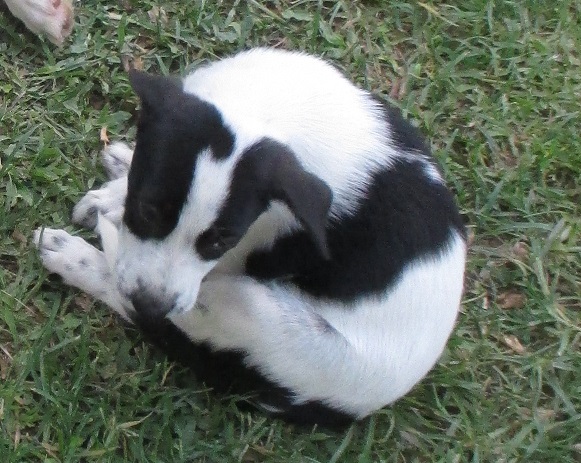 The last pup left.    A little female and not fluffy.  We will find her a good home, but she is not considered a top prize although she really is the smartest of the pups.  I want to find her a really good home.

THE OLD MAN AND THE CHOOKS

Somebody got my camera and took this shot.  It reminds me of some good news:  Austin was visited by South Pacific Commission (SPC) this week, and they pledged a hefty sum toward his Happy Chicken project.   This will be enough to buy a GOOD incubator, and also to complete the construction of his new chicken pen.   The new pen will be able to pass the “qualified exporter” standards.

As other agencies scramble to provide immediate relief,  Austin and the Happy Chicken team are looking toward food security for the longer term, as it will take at least two years for the most devastated areas to fully recover.