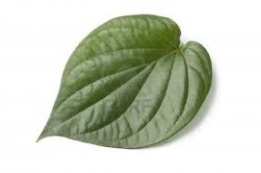 A family drama yesterday upset the apple-cart and made this week’s regular Flora and Fauna Weekly impossible.   Instead this post is dedicated to one wonder plant – piper betel, stock photo above.

.
We got to know this plant when we lived in Palau.  Nearly everyone there chews the betel nut, and everyone who chews betel nut, opens it, taps in some powdered lime (from burned coral), and wraps it in a betel nut leaf.  All betel nut chewers carry around a little woven bag with the supplies, including the betel nut leaf.   This leaf has a secondary function – it stops bleeding.
.
If anyone has a bleeding wound, someone will take a leaf (without nut or lime), chew it up, and pack it into the wound – even if the wound is large and gaping.  Bleeding stops immediately, and these wounds never get infected.   In Palau, the betel nut leaf is the first “medicine” in the traditional first aid kit.
. 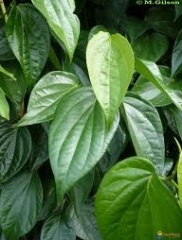 .
So why am I telling you?   Last night a dear relative took a face dive onto the cement.  Blood was pouring from the wounds.  As we organized ice and hospital bag and transport, one person ran for the betel nut leaf.   He crushed it in a mortar and pestle that was handy – and slapped it on the lacerations.    There was instant clotting – that stayed clotted for an hour.
.
Then the medical staff at the “this-is-not-Palau-and-I-don’t-really-believe-you” hospital cleaned the leaf from the wound, and the bleeding started back up at 1/4 strength.   After sutures were put in, the bleeding was down to a steady trickle (instead of a steady NOTHING).
.
The doctor in the referral hospital looked at the wounds and guessed that the patient had probably lost about 500 cc of blood from it.  I was happy to be able to say, “no – only about 200cc”   I told him about the leaf and his one word response was “vasoconstriction.”
.
God willing, some day this magnificent leaf will get the proper clinical trials that it deserves.
.
(With any luck I’ll be back to my no-drama narratives next week.)
.